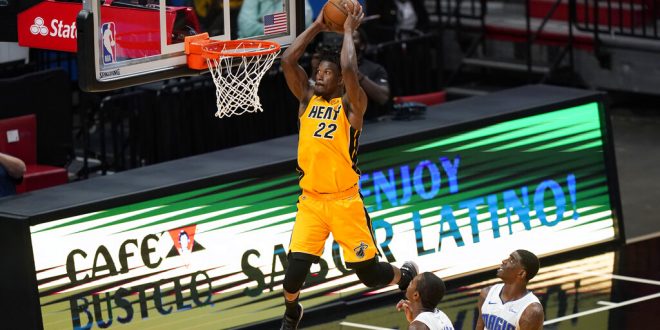 The Miami Heat defeated the Orlando Magic 111-103 last night to move above .500 for the first time this season as the two begin the second half of their season.

As they’ve done many times for over a year now, the Miami Heat pulled out a gritty win led by Jimmy Butler. He finished with 27 points, 11 assists and eight rebounds in the win without fellow All-Star Bam Adebayo (left knee tendinitis).

In typical Miami fashion, there were key contributors in big moments of the game. Kelly Olynyk scored 13 points in the first quarter for the second straight game, Tyler Herro and Goran Dragic played key minutes off the bench combining for 28 points and Jimmy Butler scored 10 points in the final period. He was also a defensive stalwart that limited Orlando to 8-for-28 shooting in the fourth quarter.

The Heat are now 7-0 and in their last seven that Butler plays in and 10-3 over their last 13 games. With a team win like this, Miami could finally be getting over their “bubble hangover.”

For the Magic, they drop their sixth straight game and currently have the fourth-worst record in the NBA at 13-24. Despite the loss, Orlando got strong production from their All-Star center Nikola Vucevic who finished with 24 points and 17 rebounds. Also, Dwayne Bacon had a season-high 21 points while Michael Carter-Williams finished with 17 points and seven assists.

After a promising start to their season, the Magic are just 7-18 in their last 25 games. Although, Aaron Gordon returned to the court tonight for the first time since Jan. 31 as he was sidelined with a sprained left ankle. Things won’t get easier for Orlando either as they currently have the fourth hardest remaining schedule to finish the season.

Last night, the Heat debuted their “Earned Edition” jersey scheme which certainly was a tagline for last night’s game. It’s a new look for Miami after years of deploying the “Vice Jersey” alternates that were widely popular among NBA fans.

Miami hopes last night serves as defining moment for them the rest of the season. After battling COVID issues and injuries for the majority of the season’s first half, the Heat look ready to roll. Now at 19-18, they sit tied fourth fourth place in the Eastern Conference and field one of the league’s easier schedules for the second half. Both teams are back in action on the road tonight as the Heat take on the Chicago Bulls and Orlando faces off with the San Antonio Spurs.

Previous Lightning Fall to Red Wings
Next #2 Arkansas vs. #7 Missouri in the SEC Tournament