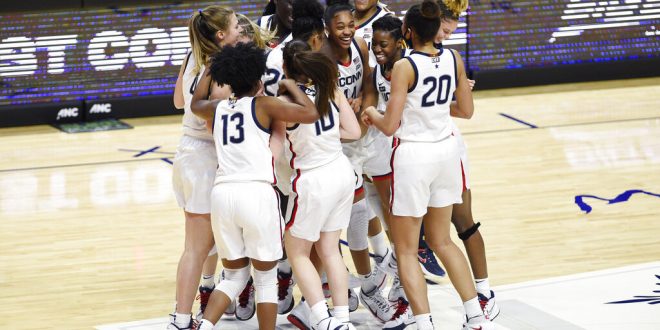 After a long, hard year full of different challenges, the 2021 NCAA Women’s Basketball Tournament is finally right around the corner. The tournament is set to kick off later this week in a bubble atmosphere in San Antonio, TX.

31 teams qualified for an automatic bid, while 33 teams were still at large. There will be four regional sites, each named for famous sites in San Antonio: the Alamo, the Hemisfair, the Mercado and the River Walk.

It was no easy year to pick only four outright number one seeds. With seven teams with the resume to earn that coveted spot, it did not give the committee an easy job. However, the job must be done, and here’s how it ended up.

Stanford, UConn, South Carolina and North Carolina State ended up impressing the committee the most, to earn those four number one seeds. The Stanford Cardinals endured a nine-week road trip due to local COVID-19 restrictions but still claimed the Pac-12 regular-season and tournament titles.

The UConn Huskies‘ celebration was bittersweet, with their number one seed announcement coming just two hours after head coach, Geno Auriemma tested positive for COVID-19. He will not be able to return to the team until at least March 24. Should the Huskies advance, they will have to play up until the Sweet 16 without their head coach. However, UConn has made 12 consecutive Women’s Final Four appearances.

All Tier I personnel have tested negative for COVID-19 since daily testing commenced, per NCAA Tournament protocol, on Tuesday, March 9.https://t.co/nkuewOx4bV

The NC State Wolfpack claimed 11 top-50 NET wins during the regular season. This included two wins over Louisville and one at South Carolina. Conference titles seemed to play a big part in the selection of the top four, with each of the four winning their conference title, including NC State earning the ACC Tournament title.

The South Carolina Gamecocks defended their SEC Tournament title this year, after playing one of the most difficult schedules in the country. The Gamecocks’ 13 wins against ranked opponents are the most in the country and they have been ranked in the top five of the AP Poll in all but one week this season.

The No. 1 seed in the Hemisfair Region is @GamecockWBB!#ncaaW pic.twitter.com/xx2EhLsHBW

Many were surprised that the Texas A&M Aggies did not claim a number one spot. However, they did pick up a number two seed. However, the Aggies fell to Georgia in the SEC Tournament semifinals, which most likely impacted their seeding. Texas A&M did claim the SEC regular-season title though.

The Tennessee Volunteers claimed a three seed after a pretty solid season. They defeated South Carolina in the regular season, before falling to them in the SEC Tournament. They finished ranked No. 13 in the AP Top 25, and they gave UConn a run for its money in their regular-season meeting, before falling 67-61.

Also a number three seed, the Georgia Bulldogs. This is the Bulldogs’ highest seed in the tournament since 2007. While Georgia has never won an NCAA Tournament title, they have appeared in 20 Sweet 16 appearances, 11 Elite Eights and five Final Fours.

Earning a four seed, the Arkansas Razorbacks. The Razorbacks have not made the tournament since 2015, but enter with their highest seeding since 1991. Arkansas’ picked up two signature wins this season, taking down both UConn and Baylor, who finished the season fifth in the AP Poll.

The Kentucky Wildcats join Arkansas as a number four seed in Kyra Elzy’s first season as head coach. The appearance marks Kentucky’s 16th NCAA Tournament bid in program history. The Wildcats have reached the Elite Eight twice in program history but have never played in a Final Four.

Rounding out the SEC’s bids, the Alabama Crimson Tide earned a number seven seed. Alabama is making its 11th appearance in the NCAA tournament and first since 1999. The Crimson Tide raced to an 8-0 start before losing its first game in January. The highlight of the season came in an 86-78 win at No. 14 Mississippi State on Jan. 14