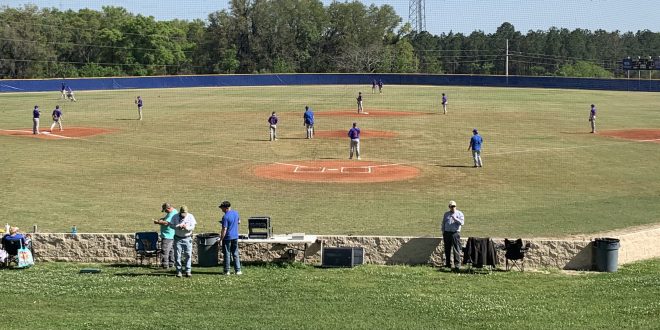 Bronson warming up for an intense game with Saint Francis Catholic. Photo by Trey Johnson

In Collaboration with Trey Johnson

It was a chilly Monday night, but the action in the 7th inning got the spectators sweating.  After trailing the entire game, the Wolves were able to bring the game to one run in the last inning with the bases loaded.

Slow for the Wolves. Trenton started fast – something that helped them in the end.

In the first inning, the Trenton High School Tiger’s came out hot by scoring two runs, while keeping the Wolves to zero.

The Wolves held the Tigers to two and were able to get a run themselves after Mason Bell was able to send Nicolas Gomez-Vera home with a single bringing the score to 2-1.

Mistakes on the Wolves end allowed the Tigers to score another run in the third inning.  This didn’t discourage the Wolves when they were up to bat.  Luke Fariborzian hits a bunt and makes it safely to first base, but the Tigers overthrew to first, allowing Fariborzian to book it to second.  Nate Wolf runs home.  3-2 Tigers.

The Tigers were able to expand their lead within the next few innings, while the Wolves could only seem to get one run home. The score at the end of the sixth was 7-3.

Things start to heat up

The Wolves kept the Tigers from scoring while in the field during the 7th.

How much magic was left in the tank? The Wolves were able to come back from down four runs in a game Friday against Bronson. Could they do it again?

Trenton had other plans.

Zak Cetin steps up to bat with one out on the board.

He swings and hits a line drive to Trenton’s shortstop who makes a diving catch for the out and then throws the ball to third to end the game on a double play.

Head Coach Daniel Bell had this to say about the team’s slow start.

What’s Next For the Wolves?

The Wolves will travel to Aucilla Christian to take on the Warriors at 4 p.m. on Friday.

Jolie Katzen is a third-year Journalism major with a focus on sports media at the University of Florida.
Previous UF Women’s Basketball Season Ends
Next Ellie Lazzari Thrives as Gator Gymnastics Freshman