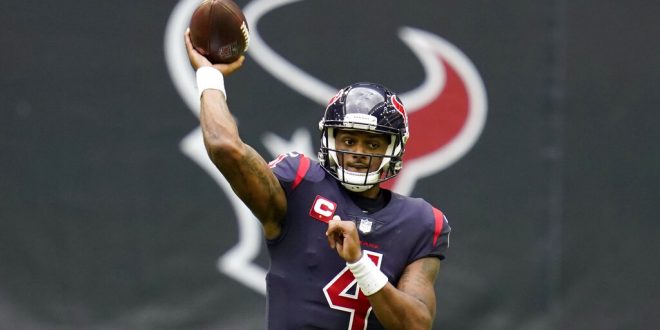 FILE - In this Dec. 27, 2020, file photo, Houston Texans quarterback Deshaun Watson throws a pass during an NFL football game against the Cincinnati Bengals in Houston. A 14th woman has filed a lawsuit accusing Houston Texans quarterback Deshaun Watson of sexual assault and harassment. The claims in the latest suit, which was filed late Monday, March 22, 2021, in a Harris County state district court, are similar to those in the earlier cases. (AP Photo/Matt Patterson, File)

The lawsuit count is up to sixteen today against Deshaun Watson.

Yesterday, six consecutive lawsuits were filed against the NFL star, and the claims haven’t stopped coming.

A slew of women are accusing the NFL star of sexual misconduct, and today brings in another similar case.

Watson has now been accused of being a “serial predator”, and the claims involve accusations of civil assault and harassment.

The most recent incident is said to have taken place in July and is the first one to have occurred in California.

The woman was a massage therapist and claimed that Watson exposed himself and tried “to get her to pleasure him”.

The suit also stated that Watson told the woman “I will not have you sign an NDA but don’t ever talk about this.” It also disclosed that the woman “was completely numb with fear at this point as she was leaving” and “felt violated, ashamed and disgusted.”

All of the 16 lawsuits describe similar behavior patterns to this.

Watson has not been criminally charged yet, and the lawyer defending the women will submit a package of information to the Houston Police Department and the Houston District Attorney. Houston lawyer Tony Buzbee is representing the fourteen women, and released this statement regarding the allegations:

“When you make these kinds of allegations, the first thing that people think is it’s a money grab, and they blame the victim.”

Buzbee also stated that Watson’s “conduct happened as recently as this month.”

Buzbee also released this statement regarding if the accusation had anything to do with the Texans:

“This case has nothing to do with the Texans, has nothing to do with free agency, the timing,” Buzbee said. “I don’t know anything about that silliness, and I frankly don’t care about it. [The] Texans are not a team that I follow. This case is instead about women, brave women. Brave women who are willing to step forward knowing that they will be criticized and ostracized.”