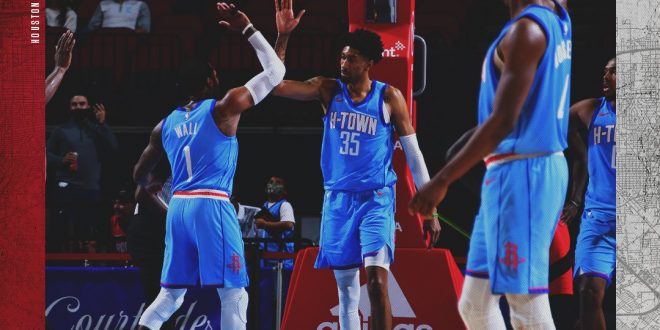 The Rockets defeated the Raptors 117-99 on Monday. Photo courtesy of @HoustonRockets.

After a historic 20-game slide, the Houston Rockets are victorious once more.

No Favors for the Franchise

Beginning with a 111-106 defeat at the hands of the San Antonio Spurs on Feb. 6, victory eluded Houston for over a month.

Some of these games were not close. A 20-point loss to the Sacramento Kings. A 27-point loss at the hands of the Celtics. Perhaps the worst performance for the Rockets came against the Grizzlies, who shut down Houston 133-84.

Back in the Saddle

John Wall gave Houston a glimpse of what they had been missing, earning his first Triple-Double since 2016.

The Houston bench also performed, scoring 28 points for the Rockets.

When Houston faced off against Toronto, one aspect of Houston’s play was noticeable to point guard John Wall and head coach Stephen Silas. Teamwork.

“Everybody that stepped on the floor played great,” said Wall. “And one thing about it is, everybody was engaged for the whole 48 minutes.”

Silas was also proud of the selflessness of the team. They racked up 28 assists in the 117-99 victory over the Toronto Raptors.

“Tonight, it was a team effort. Guys weren’t necessarily worried about their own shots,” said Silas.

The ball movement was also a subject of praise from Silas.

Rockets Need to Keep Up Momentum

The 20-game kerfuffle has taken its toll on Houston, who are now 19 games behind the West-leading Utah Jazz.

The Rockets next face Gordon Hayward and the Charlotte Hornets who are even at 21-21.

Matthew Bell is a senior at the University of Florida. He completed his associates degree at State College of Florida in Bradenton and transferred to UF in 2019. His favorite sports are American football and baseball.
@@write_matthew
Previous Jacksonville Jaguars Welcome Phillip Dorsett Back To Florida
Next NFL Announces Plans for In-Person Draft