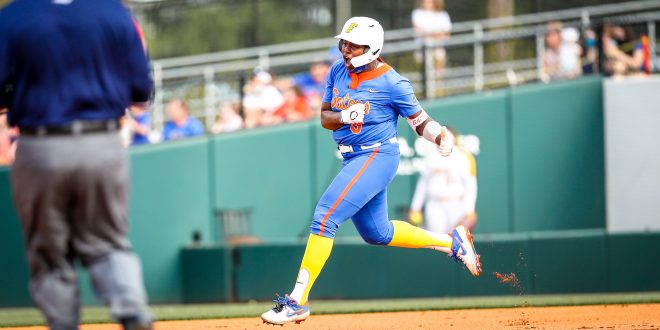 Jaimie Hoover celebrates a 2-run home run that put the Gators up 4-0 over the Tigers. (Photo Courtesy @GatorsSB Twitter)

The  Florida Gator softball team (22-3) won 7-4 over the LSU Tigers (18-9) on Saturday at Katie Seashole Pressly Stadium. Katie Chronister earned her sixth win for the Gators in the circle but only pitched 3.2 innings and allowed four earned runs. Tigers starter Ali Kilponen took the loss after only facing six batters and giving up four earned runs in the first inning.

With the win, the Gators advance to 7-1 in the SEC and clinch the three-game series. They will look to sweep the Tigers at noon Sunday.

The Gators wasted no time getting on the scoreboard, as Kendyl Lindaman and Jaimie Hoover both hit two-run homers in the first inning.

Faced with a 6-0 deficit, the Tigers found life in the top of the fourth inning. Taylor Pleasants and Amanda Doyle both singled for their first hits of the series to put two runners on with no outs. The next batter to the dish, Georgia Clark, scored Pleasants on an RBI ground out.

Then, the middle of the lineup teed off. A walk, single and two RBI double brought Doyle and Clark in to score to cut the LSU deficit to 6-3.

Natalie Lugo came on in relief of Chronister to face Danieca Coffey with runners on second and third and only one out. Coffey singled down the left side to score one and put up LSU’s fourth run of the inning. However, the rally would stop there, as Aliyah Andrews lined out in the next at-bat.

Gators catcher Julia Cottrill stayed hot at the plate, ripping an RBI double into left field in the bottom of the fifth inning to score Hannah Adams and stretch the lead to 7-4. Both Florida batters made a great impact at the dish. Cottrill went 2-for-4 with an RBI, and Adams swung a perfect 4-for-4 with two runs and an RBI.

B5 | Make that 4-for-4 on the day for Adams! Her single new career-high! #GoGators

Lugo closed out the victory for the Gators, pitching 3.2 scoreless innings and giving up only three singles.

The Alabama Crimson Tide rolled over Kentucky, 11-6, on Saturday to advance to 7-1 in the league, so the Gators will remain in a tie for second place in the SEC. Both teams remain just shy of the first-place Arkansas Razorbacks who have yet to lose a game in the SEC.

With the loss, the Tigers drop to 4-4 in the SEC, and they remain at seventh in the league. The Gators and Tigers will face off in game three of the series on Sunday at noon on SEC Network+.

I'm a third-year student at the University of Florida passionate about storytelling and sportswriting. My goal is to work in communications for a professional sports team after I graduate.
Previous Gators falls 4-1 in second game in South Carolina series
Next Loyola Chicago’s NCAA Basketball Run Ends in Sweet-16