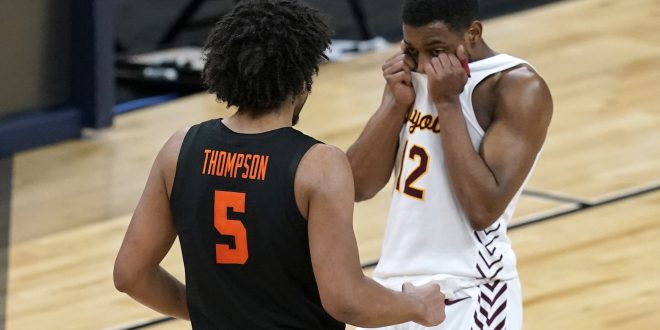 After an incredible run to the final four in 2018, Loyola University Chicago had their season come to an end following their 65-58 loss to Oregon State in the Sweet 16.

The Ramblers came in as a number eight seed in the NCAA tournament.  They went 21-4 in the regular season before winning the MVC Championship. They finished the season with 26 wins which was the most they had since winning 32 games in 2017-18.

Ramblers finish the season 26-5. Thank you to all the fans who supported us through this crazy year. #OnwardLU pic.twitter.com/zw3M77EJAl

The lone two other players for the Ramblers from their 2018 run were Cameron Krutwig and Braden Norris. Krutwig had 14 Points, while Norris also finished in double figures with 10. They were unable to stop Ethan Thompson, who went for a game-high 22 points for Oregon State. Despite the loss, Head Coach Porter Moser was extremely proud of his team for another great run.

As so many other college programs went through, the Ramblers had four games postponed this season as well as one canceled. They started the season out 3-0 before they fell for the first time against the University of Wisconsin.

Loyola Chicago went 16-2 in the conference during the regular season. Their only two losses came to Indiana State and Drake. However, they were able to avenge their losses against both teams in the conference tournament, as they won three games in three days to cement their automatic bid into the NCAA Tournament.

Throughout the season, the Ramblers only averaged 71 points per game but played tremendous defense, limiting teams to 56.1 points per game. Krutwig was the teams leading scorer as he averaged 15 points and seven rebounds per game.

While the Ramblers will likely return most of their team next season, the big question will be if  Moser comes back after another terrific run in the postseason. His run with Loyola Chicago has gained even more attention, and he will be a coach to watch this offseason.