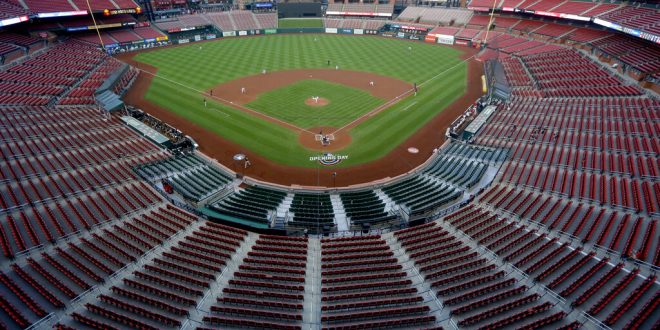 FILE - In this July 24, 2020, file photo, empty seats are viewed in Busch Stadium as St. Louis Cardinals starting pitcher Jack Flaherty throws in the first inning baseball game against the Pittsburgh Pirates in St. Louis. Major League Baseball players rejected a proposal to delay the start of spring training and the season due to the coronavirus pandemic, vowing Monday, Feb. 1, 2021, to report under the original schedule. (AP Photo/Jeff Roberson, File)

MLB Players Excited To Have Fans Back

Throughout the history of sport, fan attendance has been one of the most relished aspects of professional athletic competition. The frequently used phrase, “home-field advantage”, was first coined to represent the proportion of home fans to away fans. While fans are anxiously awaiting the opportunity to be able to return to the stands, so are the players. Excluding the 2003 Steve Bartman incident, there are few times in sport history where fan attendance has been viewed negatively. Furthermore, 7-time All Star, and 3-time Cy Young Award winner, Max Scherzer of the Washington Nationals, spoke on how much fans have been missed.

The 2020 MLB Season was one of the most unorthodox sport seasons  of all-time. Comparatively, the normal 162-game season was shortened more than 60 percent to a mere 60-games. The pandemic filled season featured opt-outs from top players, cancellations and postponements. Though the journey was hectic, in the end the Los Angeles Dodgers were crowned the 2020 World Series Champions. 3-time All Star and star pitcher for the New York Yankees, Gerrit Cole spoke to the media about the impact of empty stadiums in 2020.

The 2021 Major League Baseball season has officially arrived. Finally, fans will be able to support their favorite teams, and root against their rivals. San Diego Padres shortstop, Fernando Tatis Jr. spoke on how excited players are to welcome back fans.

26 out of 30 Major League Baseball teams will be competing on Opening Day today, including the defending World Series Champion Los Angeles Dodgers. Additionally, the 2021 MLB season returns to a 162-game season format, where only the best 10 teams will make the playoffs. Undoubtedly, the 2021 season the will be unpredictable, as the COVID-19 virus is still circulating. However, one thing is for certain; fans are officially back in the stadiums for baseball.

Jason Myers is a dedicated sports journalist that covers the entire world of sports. Myers currently studies Journalism at the University of Florida, and will be graduating this upcoming May, 2021.
Previous NCAA President Mark Emmert: “We Failed the Women’s Tournament”
Next Charlie Strong Talks New Gig in NFL