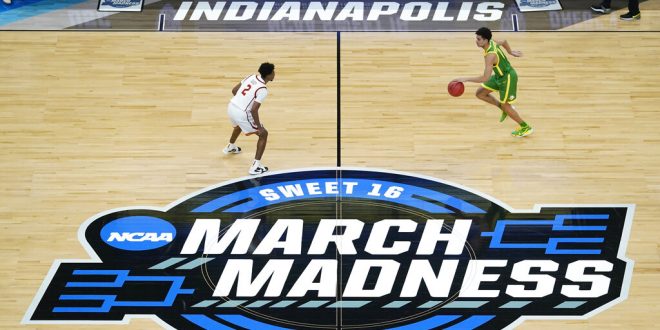 FILE - Oregon guard Will Richardson, right, drives up court in front of Southern California guard Tahj Eaddy (2) during the first half of a Sweet 16 game in the NCAA men's college basketball tournament at Bankers Life Fieldhouse in Indianapolis, in this Sunday, March 28, 2021, file photo. Arena branding was among the differences people noticed between the NCAA’s two biggest events, the women’s and men’s basketball tournaments. (AP Photo/Darron Cummings, File)

The NCAA has been under scrutiny as of late.

@ncaawbb @ncaa this needs to be addressed. These women want and deserve to be given the same opportunities.

In a year defined by a fight for equality this is a chance to have a conversation and get better. pic.twitter.com/jFQVv1PlUt

Earlier this month, photos of the NCAA Women’s Basketball Tournament bubble in San Antonio caught fire on social media. The image showed the disparity between the women and men’s weight room. Women were provided with a singular dumb bell rack along with a massage table. Whereas the men had a full assortment of equipment in Indianapolis. Combine this with the beginning of oral arguments in the NCAA’s anti-trust case for the United States Supreme Court, NCAA President Mark Emmert exclaims the organization has “failed the women”.

Systemic disparity may be evident in the NCAA’s weight room practices. And the images from San Antonio show the deeply rooted systematic disparity of the NCAA. Emmert noted the gender inequity on Wednesday. Emmert noted this is not just in basketball but across all NCAA sports. So, the NCAA is now turning the focus on things they can control, such as their tournaments.

If the NCAA aims to shorten the gender gap in collegiate sports, they must take action. Unlike most organizations, they have a platform to promote equality through tournaments such as women’s basketball. Furthermore, Emmert must promote the women’s game better through media partnerships. In 2011, the NCAA paid $500 million to continue broadcasting rights for NCAA Championships. With the deal set to expire in 2023, there’s an opportunity for the next agreement to bring in profit for the women’s game. This is just one step towards closing the gap of inequality.

The NCAA argued in front of the US Supreme Court for the first time in 40 years on Wednesday. In NCAA v. Alston, the Supreme Court is reviewing the NCAA’s anti-trust privilege’s in preserving amateurism for their product. Eventually, this may lead to the passing of a national Name, Image and Likeness legislation. Such legislation would allow players to make a profit off their name, image and likeness. For years, the NCAA has used the principle of amateurism to protect from this. Amateurism is the practicing of an activity, especially a sport, on an unpaid rather than a professional basis.

On the first day of oral arguments, the NCAA heard the grunt of their athletes through the justices. Justice Elena Kagan asked why the court shouldn’t see the NCAA as an undisputed power over its market using amateurism to fix the price of labor.

“You can only ride history for so long,” Kagan said.

Justice Amy Coney Barrett questions why the NCAA gets to define how an athlete gets paid.

Emmert hopes to accomplish a national NIL legislation in the coming year. However, the athletes are still unsatisfied. Athletes such as Iowa’s Jordan Bohannon have announced they will not return to school without such legislation. Even further, athletes around the country sport #NOTNCAAPROPERTY in hopes of passing NIL legislation along with a renewed importance of Title IX.

The NCAA will continue its trial at the U.S. Supreme Court. It may be slow, but 2021 could bring significant changes unforeseen in collegiate sports.

Sam Petosa is a Journalism major pursuing a Specialization in Sports and Media at UF. The South Florida native produces daily shows for WRUF, including "Sport Scene with Steve Russell, and "The Tailgate." In addition, Sam provides weekly sports updates for WUFT News and radio Sportscenter's for WRUF radio. Sam has been a writer at ESPN Gainesville since January 2020.
@sampetosa5
Previous Mullen Speaks After Impressive Gator Pro Day
Next MLB Players Excited To Have Fans Back