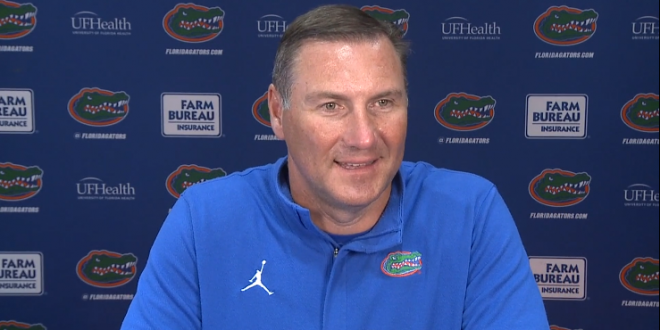 The eyes of the pro football world were on Gainesville yesterday as head coach Dan Mullen’s former Gators showcased their skills at their annual pro day. In a year without a true, in-person NFL Scouting Combine due to COVID-19, college pro days are taking the lead for physical evaluations of prospects for this month’s NFL Draft.

The Gators worked out 16 draft eligible players in this year’s class (in addition to former Gators Kalif Jackson and Martez Ivey) without much surprise as to what they could do. The usual stars wowed with their athletic prowess and skill. Kyle Pitts and and Kadarius Toney used Wednesday’s workouts to continue climbing in draft stock.

A few less-heralded Gators used Wednesday’s opportunity to make names for themselves for the Draft four weeks from today. Marco Wilson especially impressed scouts and coaches in a big way. Trevon Grimes, Stone Forsythe, and Tedarrell Slaton also turned the heads of the personnel representing 31 NFL franchises in attendance.

One common theme Mullen preached about what Florida football has to offer to the NFL is versatility. For players like Pitts, Toney, and Grimes among others, he attributed wide skill sets along with intangibles as the recipe for matchup success in the game’s highest level.

Here’s what Dan Mullen had to say about this year’s edition of the Florida football draft class:

As if there were any doubt to Pitts’ ability at the next level, he physically dominated the spotlight like he had something to prove.

Mullen described him as someone who could be elite at either the receiver or tight end spot in the pros and that he did nothing to surprise him yesterday.

“I get more just ‘wows’ than asking with him. He’s such a dynamic player,” Mullen said.

He cited Florida’s pro-style offense as a beneficiary for Pitts’ translatable skillset as he looks to be the Gators highest drafted pass catcher ever. Pitts’ 4.44 time in the 40-yard dash and 33.5-inch vertical showed his unique blend of power and speed.

“He’s kind of like a unicorn,” said Mullen, “and the only way you can defend a unicorn is with another unicorn. If you don’t have a unicorn on defense, you got a problem.”

Mullen stated Pitts’ ability to create matchup problems for opposing teams will make him highly coveted in the Draft. He harped on how fun it was to coach Pitts not only on the field, but as a powerful chess piece when designing game plans with his coaching staff in the meeting room.

Pitts is currently slated as a top-5 pick in the draft, but has been included in rumors of teams trading up to nab the 6-6, 245-pound tight end.

Wilson Has Huge Day, Gets Attention From Scouts

Most known on the national stage for his incident in tossing a shoe during Florida’s loss to LSU last fall, Marco Wilson got people talking in a positive way yesterday as he was one of pro day’s best performers.

Mullen noted his ability to bounce back after the costly penalty and make significant strides physically and mentally in Florida’s offseason buildup to pro day. His numbers were nothing short of astounding: 4.37 in the 40-yard dash, 26 reps on the bench press, and an event-leading 43.5-inch vertical.

Those physical attributes, in addition to his 73.5-inch wingspan, have made him a ballhawk for the Gator defense and now, an interesting candidate for drafting come the end of the month.

Some draft boards have Wilson projecting to be a fourth-round pick, but he more than anyone at Florida’s pro day seems poised to climb as the draft draws nearer.

For Kadarius Toney, March was a month that saw him start to climb the mock draft boards into the first round. The 6-foot, 193-pound wide receiver averaged his 40-yard dash times to 4.4.

Mullen cited that Toney, a former quarterback in high school, is a player that can embrace his versatility and give the team that drafts him looks at many different positions in the league.

“I still think his receiver skills are developing…I still think he has a huge future,” said Mullen. “He understands the game enough to play multiple spots.”

Toney’s ability to go get the ball vertically with his jumping ability and horizontally with his foot speed put him in line to face the best cornerbacks in the pros, should he continue to develop at the level Mullen thinks he can.

“He’s just really scratching the surface right now of what he’s gonna become as a receiver at the next level,” Mullen said.

Toney is currently projected to be around the cutoff of the first and second rounds in the draft. A strong performance yesterday could continue his upward trajectory.

Popular in the college ranks, but not rated as high by NFL scouts, Heisman finalist Kyle Trask is somewhat of a question mark heading into draft day. Mullen wants to change the narrative on Trask’s draft stock.

“He keeps erasing every question people have about him everywhere he goes,” Mullen said.

Still, Mullen stated that Trask (6-5, 236 pounds) will make his impact in the NFL with his intelligence, his locker room presence, and his feel and love for football.

“You’re getting a guy that is going to prepare himself every single day to be ready to go play…that’s what a pro is, and that’s what he will do,” Mullen said.

Look for Trask to land somewhere in the second round. Although his numbers at pro day did not specifically wow, Mullen thinks his ability and impressive college resume are what matters for how far he can go as a pro.

“Ten years from now, I wouldn’t be surprised if he is in the group of the top five quarterbacks in this year’s draft.”

Caleb Wiegandt is a first-year Journalism student on the Sports and Media track in the University of Florida's College of Journalism and Communications. He has previous bylines in USA Today, Yahoo Finance, and The Louisville Courier-Journal before arriving at ESPN Gainesville. Caleb is a proud graduate of Holy Cross High School in southwest Louisville, Kentucky, where he was born and raised. You can reach Caleb at cwiegandt@ufl.edu.
@@CalebWiegandt
Previous PK Yonge Baseball Game Ends Early Due to Lightning
Next NCAA President Mark Emmert: “We Failed the Women’s Tournament”