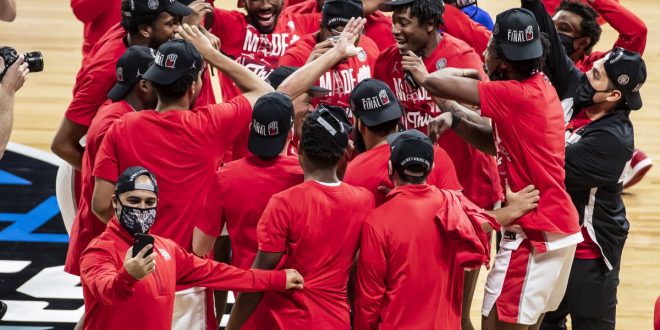 Houston celebrates its first trip to the final four in over 30 years. Image via: @UHCougarMBK on Twitter

Baylor and Houston battle for spot in NCAA title game

The Baylor Bears are set to battle the Houston Cougars Saturday night with a spot in the NCAA National Championship game on the line.

Baylor and Houston battle for spot in NCAA title game

The Bears were the No. 1 seed on their side of the bracket entering the tournament, and for good reason. Baylor finished the regular season 26-2 and were the top seed in the Big-12 tournament before suffering a loss in the semifinals to Oklahoma State. The loss didn’t slow the Bears down, however. They rolled through the first two rounds of the NCAA Tournament, beating Hartford and Wisconsin by a combined 37 points. They started slow in the Sweet 16 against Villanova but pulled away for an 11-point victory. Baylor punched their ticket to the final four with an eight-point win over the third-seeded Arkansas Razorbacks

The Cougars are as hot as any team in the country right now, rattling off 11 straight wins dating back to December of 2020. They took home the American Conference Tournament title and punched their ticket to the dance, entering March Madness as a second seed with a record of 28-3. Houston handled its business against Cleveland State in the first round but was nearly upset in round two by the No. 10 seed Rutgers. The Cougars escaped with a 63-60 victory and then easily took down Syracuse in the Sweet 16. They grabbed a final four spot by taking down the Oregon State Beavers in the Elite Eight, 67-61.

The Cougars pride themselves on their defensive prowess and allow just under 56 points per game. On the offensive end, they are led by Quentin Grimes. The junior guard averages 18 points and six rebounds per game, knocking down 41% of his shots.

Houston enters the contest as five-point underdogs, and head coach Kelvin Sampson knows it will be a tough test. However, he believes his team’s hard work will pay off.

First tip is expected to come at 5:14 p.m. Saturday and the game will be broadcast live on CBS.

Michael Hull is a sophomore at the University of Florida and is currently studying Journalism & Sports and Media.
@Michael_Hull33
Previous Minnesota, Denver Advance to Regional Final
Next Becky Burleigh Adjusting to Post-Coaching Life