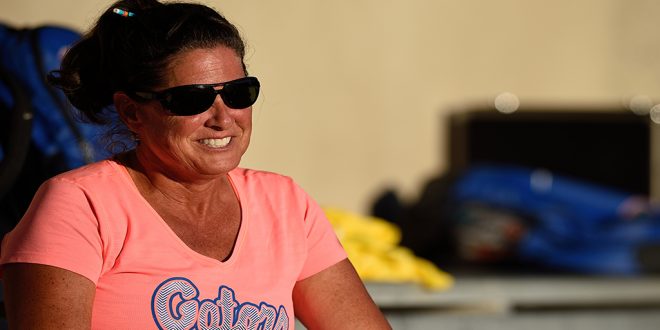 If you ask her what she is going to miss more about coaching, the closeness to a team she will say.

Burleigh began to play soccer at the age of 10 in Tarpon Springs, Fla. What started as a way to make friends became a passion. She played her way through high school where she was the team captain and was named to the All-South team as well as the team’s Most Valuable Player from her goalkeeper position, according to Florida Gators. She was eventually noticed by Methodist University in Fayetteville, North Carolina. She earned a bachelor’s degree in biology from Methodist College while helping her team. She earned her master’s degree in exercise science from Georgia State University in Atlanta.

Burleigh as a coach

At a very young age, Becky was already a leader. At only 21-year-old, she became the coach at Berry College in Rome, Georgia. Under her guidance, the team finished as the NAIA runner up. She then dropped everything to come back to Florida. Twenty-six years ago, Burleigh jumped to the opportunity to start a team from scratch and build a legacy. Today, we cannot talk about UF soccer without mentioning Burleigh.

Being a coach does not come without challenge. To Burleigh, it was more than the opponents. It was waking up everyday  knowing the team’s disparity and manage to make them play together. Burleigh said that as a coach, you become more than a manager.

“You know if you are a head coach in any sport level, you are becoming a CEO and less of a coach because there is just so many aspects to the job that aren’t coaching on the field” she said.

Many challenges that she wouldn’t be able to overcome without her coaching staff and athletes.

Burleigh may not want to hand pick any favorite athlete to not get in trouble, as she put it. But, she really enjoyed every second she spent with the team, and how close they have become.

“I mean, you know pretty much what’s going on in most people’s lives, for you know there the whole time,” Burleigh said.

With all this power came great responsibility. Something that she is not going to miss when retired.

” I am going to be really excited about turning off my phone at night. I never do that and not having to worry about 50 people and just worried about myself, “she said.

Also, Burleigh is not going to miss 12 hour travel days.

Florida can’t seem to get enough of Burleigh. In August, she will start teaching in the college of health and human performance.

Previous Baylor and Houston battle for spot in NCAA title game
Next No. 1 Seed Gonzaga meets No.11 UCLA in Final Four