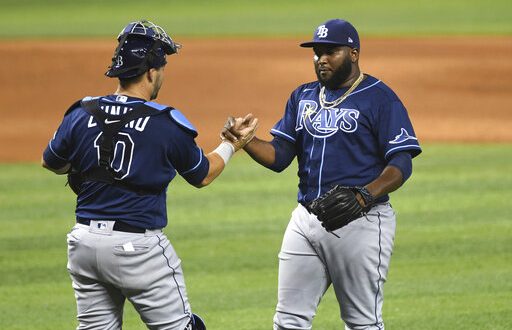 The reigning American League champion Tampa Bay Rays kicked off their season with an Opening Day victory over the Miami Marlins on Thursday.

Strong Performances on the Mound

There weren’t many balls flying into the stands Thursday afternoon in Miami. This was thanks in large part to solid pitching performances from Tampa Bay’s Tyler Glasnow and Marlins’ ace Sandy Alcantara.

Both pitchers managed to put in six innings of work. Glasnow only allowed zero runs on one hit and zero walks. Additionally, he also had six strikeouts to go along with his single hit.

Alcantara, on the other hand, recorded seven strikeouts, two walks and allowed no runs in his six-inning performance for Miami (0-1). For Alcantara, Thursday marked only the third time in Marlins’ history that an Opening Day pitcher lasted at least six innings without allowing a run. The only other two are Kevin Brown (1997) and Josh Beckett (2005).

With two outs remaining in the eighth inning and the score still deadlocked at 0-0, Tampa Bay’s  Austin Meadows stepped up to the plate and launched a home run to right-center field off of Miami reliever Yimi Garcia.

This solo home run would go on to be the only score of the game and all the Rays (1-0) needed in order to pull out the series-opening win.

The Marlins’ closest chance to evening the score came with one out in the ninth inning when first baseman Jesus Aguilar sent a deep fly ball to the left-field warning track. Aguilar recorded two of Miami’s three hits on the night.

Game 2 of the three-game series is set to get underway tonight at 7:10 p.m. Left-hander Ryan Yarbrough will get the start for Tampa Bay while right-hander Pablo Lopez gets the go for Miami.