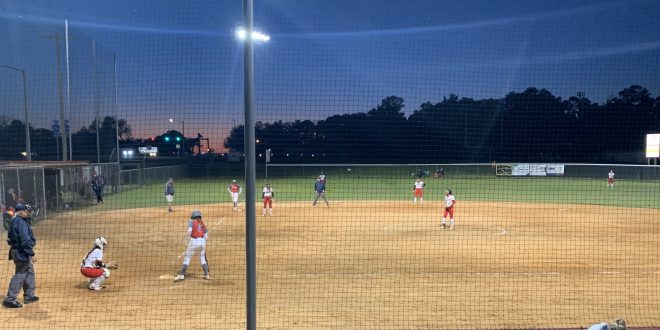 Williston freshman pitcher Navaeh Hayes on the mound in the bottom of the fourth inning. Photo by Trey Johnson

Williston Head Coach Lavar Williams says the Red Devils fell short due to a lack of hits and a few fielding mishaps.

The bats weren’t the only things that were cold. The temperature was below 60 degrees for the majority of the game. Fans were layered in sweatshirts and jeans. Some fans even brought blankets to provide an extra layer of warmth.

Neither team got off to a hot start. After the first inning, the game was tied at zero. Santa Fe was able to score one run in each of the second and third innings and led 2-0 after three. Williston Freshman pitcher Navaeh Hayes was able to stop the Raiders from adding more runs by striking out Santa Fe’s Destiny McBroom to end the inning.

No one scored in the fourth.  The Red Devils narrowly escaped the inning without giving up a run as the bases were loaded before the final out.

The teams adjusted to the weather after the fourth. With the temperature now below 55 degrees, Santa Fe was able to take advantage of Williston’s mistakes adding three runs. While Williston’s fielding took a hit, the Red Devils showed signs of life as they got on the board in the sixth.

Hayes started the inning with a single. Then Raegan Geiger, sophomore, batted Hayes in with a triple. Geiger would steal home on a wild pitch shortly after.

The Red Devils cut Santa Fe’s lead to three. Raiders led 5-2 going into the bottom of the sixth.

Raiders Begin to Shut it Down

Two words: Abigal Christopher. The Santa Fe senior pushed the lead back to five with a two-run homer to left field. Santa Fe led 7-2 after six.

Williston didn’t quit in the final inning. The Red Devils took advantage of fatigued Raider fielders scoring two runs. Now down 7-4, the Red Devils had life. The problem was that they had two outs. Williston’s Savannah Rodriguez stepped to the plate. The freshman battled with Raiders’ pitcher Madi Hewett for over two minutes.

Hewett won the matchup. Rodriguez hit the final pitch right back to Hewett who made the throw to first, sealing the Raiders’ win.

Madi Hewett. She did it all for the Raiders Friday. Not only did Hewett pitch the entire game (throwing six strikeouts), the junior batted in a run and made winning plays all night.

Even though she’s a pitcher, Hewett said she “loves to hit.” She called hitting her favorite part of softball.

“I would give up pitching to hit any day,” she said.

Revenge is On Deck

Both teams will be looking to even the score in their next matchups.

Williston will travel to Buchholz High School for a game Monday at 7 p.m. The Bobcats won 8-5 on March 12. Coach Williams’ message to the team:

The Red Devils have lost seven of their last eight games.

Trey is a second year sports media major at the University of Florida, and a high school reporter for WRUF.
@@treyboogie5
Previous Gators Drop Second Game to Ole Miss in Brutal Ninth Inning
Next Gators Softball Looks to Stay Hot at Georgia