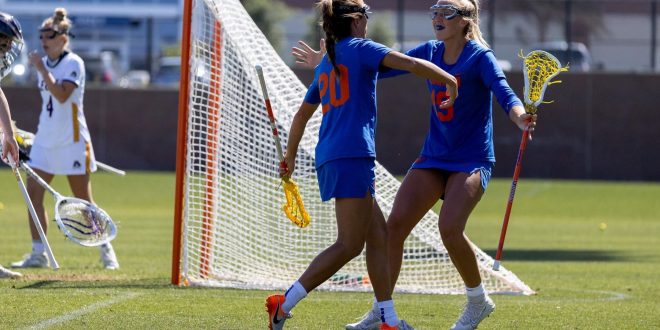 No. 10 Gators Lacrosse Remains Undefeated Against ECU in Series Sweep

The Gators swept the ECU Pirates 19-7 on Saturday afternoon at Donald R. Dizney Stadium to complete the series. The Gators remain undefeated against the Pirates with a 3-0 all-time record.

The game started off slow with neither team on the board for the first 3:30. After that, the Gators turned out five straight goals in a matter of five minutes. Haus and Shannon Kavanaugh scored two goals each and Brianna Harris scored the other.

In the last 20 minutes of the first half, the Gators managed to score eight more goals. The Pirates were held to only two goals in the first half, making the score at the half 13-2.

Coming back onto the field, the Gators maintained the momentum. Less than two minutes into the final half, ECU’s Ally Stanton scored a goal for the Pirates. The Gators responded with three goals from Haus, Pavinelli, and Bresnahan.

With 13 minutes left, the Pirates were able to score three back-to-back goals. The score was 16-6 with six minutes left. Jill Quigley, Whitney Albert, and Charlotte Harmon put themselves on the board with one goal each. The Gators held the Pirates to only one more goal, making the final score 19-7.

“That was the challenge we gave to the team today – to come out strong and fast from the start – and we played really well coming out of the locker room. Really pleased offensively with what we saw – we had a lot of different goal scorers and a lot of different distributors, which is great to see,” said head coach Amanda O’Leary. “Defensively, we played extremely well. We cleaned up the things that needed to be cleaned up from Thursday and came out with a great team win today.”

Next week is a bye week for the Gators. The team’s next series is against Vanderbilt is on April 16 and 18 at Donald R. Dizney Stadium.