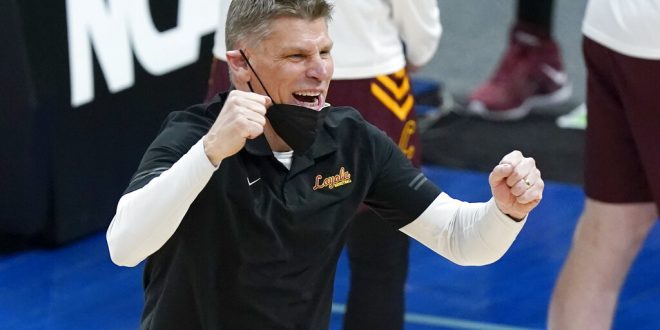 Former Gator basketball head coach Lon Kruger announced his retirement from coaching on Mar. 25th after ten successful years at Oklahoma. His future successor there knows a thing or two about winning as well.

After two memorable NCAA Tournament runs in the past four years, Loyola Chicago’s Porter Moser has been tabbed to become the next head coach for the Sooners, OU announced Saturday. Moser, 52, had been at Loyola ten years and compiled a 188-140 record as head coach of the Ramblers.

Moser and the Ramblers went 7-23 his first year at the helm but quickly recovered due to Moser’s ability to recruit Chicago-area high school players to stay home and go to Loyola. Future Loyola stars like Cameron Krutwig, Lucas Williamson, and Donte Ingram were convinced by Moser to play for a school with a rich college basketball history, and it soon paid off for all involved. Oklahoma athletic director Joe Castiglione pointed to Moser’s recruiting prowess in OU’s press release:

“He’s a purposeful and proven leader who prioritizes positive culture, accountability, academics, player development, innovation, transparent communication and a holistic approach to the student-athlete experience…Porter is also a bright, energetic and tireless recruiter who will similarly engage all stakeholders related to the future success of Oklahoma men’s basketball.”

Under Moser’s tutelage, Loyola had their program’s most successful era since the 1960’s when they made four NCAA Tournaments and won the 1963 title. The Ramblers punched their first ticket to the Big Dance under Moser in 2018, the program’s first since 1985. Earning an 11-seed, Loyola quickly became a national fan favorite when they defeated four higher seeds en route to a Final Four berth.

Four years later and now a senior, Cameron Krutwig led the Ramblers this past year back to the NCAA Tournament for another magical run. On the way, Loyola earned a spot in the AP Poll for the first time since 1985; they would climb as high as 17th by the postseason. After capturing both the Missouri Valley regular-season and tournament crowns, they reached the Sweet 16, toppling Ayo Donsunmu and 1-seed Illinois in the Round of 32.

Moser teams earned two Missouri Valley Conference Tournament championships and a 2015 CBI title during his time. During the four-year stretch from 2017 to 2021, Loyola-Chicago went 99-36 (.733 win percentage) under Moser, tied for the 10th-most wins by a Division I head coach in that time.

His Loyola teams are known for their fundamental soundness and defensive toughness. At one point in 2021, Kenpom.com ranked Loyola Chicago the no. 1 defense in the nation.

Moser began his coaching career at his alma mater, joining the staff at Creighton as a graduate assistant in 1990. He earned his first head coaching job in 2000 at Arkansas-Little Rock. In his 17 seasons as a head coach, Moser has a record of 293-241, good for a .549 win percentage.

Loyola is not wasting any time in their search for who will take over for Moser. Assistant coach Drew Valentine is expected to be named the next head coach for the Ramblers, per ESPN sources.

Valentine, 29, has been on Moser’s staff in Chicago since the start of the 2017-2018 season and was a big part of both of Loyola’s tournament runs. Valentine played his college ball at Oakland, where he graduated as the Golden Grizzlies’ all-time winningest player. He later joined legendary head coach Greg Kampe’s staff there as an assistant.

He spent two years as a graduate manager after college at Michigan State under Tom Izzo, where his younger brother, Denzel Valentine, starred and led the Spartans to their own Final Four in 2015.

Should the Ramblers finalize a deal with Valentine, he would become Division I’s youngest head coach.

Caleb Wiegandt is a first-year Journalism student on the Sports and Media track in the University of Florida's College of Journalism and Communications. He has previous bylines in USA Today, Yahoo Finance, and The Louisville Courier-Journal before arriving at ESPN Gainesville. Caleb is a proud graduate of Holy Cross High School in southwest Louisville, Kentucky, where he was born and raised. You can reach Caleb at cwiegandt@ufl.edu.
@@CalebWiegandt
Previous Florida Soccer Finishes Season With a 2-0 Win Over Miami
Next No. 10 Gators Lacrosse Remains Undefeated Against ECU in Series Sweep