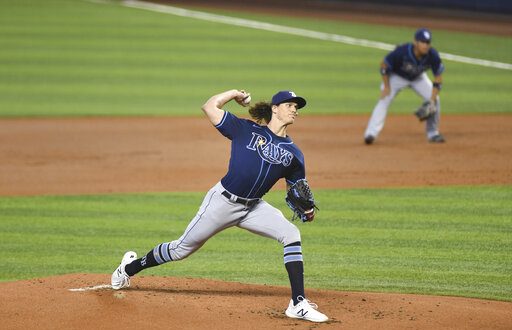 Series win to start the season? Check. The Tampa Bay Rays took the opening series against the Miami Marlins.

Some issues still need to be ironed out. But the strengths they have early elevated them to optimistic start to 2021.

A dominant start by Tyler Glasnow on Opening Day kept the Rays in the game long enough to come out the victor. The same argument can be made for Ryan Yarbrough despite the final score.

In six innings of work, Glasnow struck out six batters and allowed a single baserunner–a base hit. It’s one start, but it was what the Rays are expecting out of him this season–the return to 2019 form.

Yarbrough recorded one less out, but the results were the same for the Miami bats–goose eggs against the starters. Yarbs pitched 5 2/3 innings, striking out three and allowing four hits. Like Glasnow, he allowed no free bases.

The Rays have never been known for an explosive offense. So, to pull out a win, the hitting needs to come at the right time. In Friday’s game, this was a solo blast by Austin Meadows to give the Rays a 1-0 win. On Saturday, it was a three-run bomb by Joey Wendle to bail out the bullpen and win 6-4.

These are the kind of hits that keep Tampa Bay competitive. Just ask Mike Brosseau against Aroldis Chapman.

No one in the lineup is a threat at any moment. However, if those who get the chance step up like Wendle did in the ninth, the Rays aren’t out of the race for the AL East.

Speaking of the AL East

The Rays head to Fenway to the Boston Red Sox. Boston had nearly the polar opposite start to the season being swept by the Baltimore Orioles.

On Monday night, Michael Wacha makes his Rays debut after a strong spring straining. The Rays take advantage of the off day, and Glasnow and Yarbs will both get a shot at the Sox in this series.

Harrison is a sports coordinator at ESPN 98.1 FM/850 AM WRUF. He served as a beat writer for Florida Gators football for the 2019 and 2020 seasons. He also contributes to WRUF's Gainesville Sports Center segments and makes appearances on the Clash on Harp on Sports. Harrison has been a content writer for WRUF since January 2019 as well.
@HarrisonSmaj
Previous P.K. Yonge defeats Oak Hall in the 6th inning
Next Gators Softball Hits UGA for 17, Run-Rule Victory