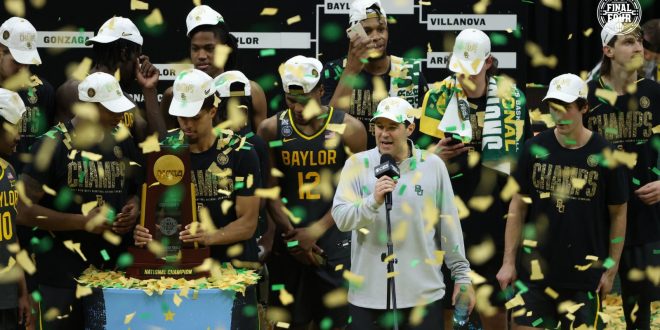 Baylor Bears continue to celebrate their National Championship win against the Gonzaga Bulldogs.

Baylor Bears can’t sleep and won’t sleep with the excitement.

Jared Butler expressed his excitement for his team and hasn’t gone to sleep yet.

Many questioned Baylor’s ability to win a championship but Head Coach Scott Drew knew better. Eighteen years ago when Drew joined Baylor he had the mindset of winning a national championship. The day has come.

Drew is excited for his team and fans stating “it’s long overdue for the state and so pleased for all of them,” in winning a championship.

In 2003 Head Coach Drew had the same winning mentality.

While they didn’t get to where they wanted to back in 2003 they are there now and the team couldn’t be more overjoyed.

Baylor beat Gonzaga 86-70 and it was a game that left many surprised.

“Gonzaga was the best team in college basketball this season, but they weren’t the best team today. It happens.” @BPredict tweeted.

While Gonzaga is disappointed in their loss Head Coach Mark Few gives Baylor credit stating “they deserve all the credit” “Baylor just beat us in every facade of the game tonight.”

Baylor continues to dance the night and day away in celebration of such a milestone and making history.

Previous Red Devils Get the Job Done at Buchholz
Next Close, But No Cigar for Gonzaga