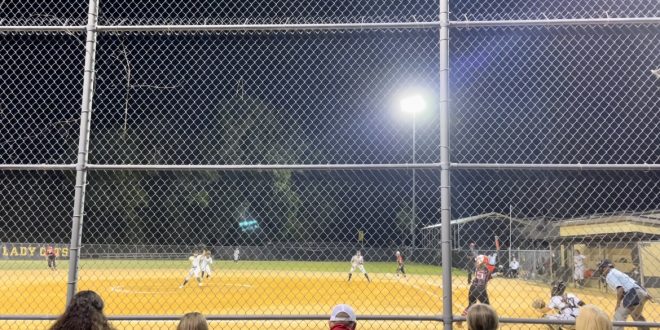 The Williston Red Devils defeated the Buchholz Bobcats 17-6 on Monday night under the lights in six innings.

The first three innings all ended in a tie.

Maci Vonderstrasse, Makenna Boyd, Nevaeh Hayes, and Jayla Graves were all able to contribute to the four runs the Red Devils had at the end of the third.

The Red Devils were hitting well, but a few mistakes in the field kept them neck and neck with the Bobcats in the third inning.

Bringing Out the Heat

In the fourth inning, Williston flipped a switch.

Bases were loaded after Vonderstrasse and Nevaeh Hayes hit singles and Reagan Geiger got walked.

Jayla Graves hits a single giving Hayes a clear path to home base.  7-4.

A single from Miyuanna Days brings another run for the Red Devils from Raegan Geiger.  8-4.

Alacia Rowe gets hit with the pitch and walks to first bringing Boyd home. 9-4.

Williston was able to keep their lead on the defensive end by only giving up one run to the Bobcats in the fourth inning.

The Red Devils expanded their lead by 3 in the fifth with the help of five players getting walked and a double from Jayla Graves.

At the bottom of the fifth, the Bobcats hit back-to-back doubles and got a run home before the Red Devils were able to get their 3 outs.

The game was cut short after the sixth inning as Williston increased their lead to 17-6.

A triple from Davis, a double from Hayes, a double for Geiger, and a home run from Graves solidified Williston’s victory.

Williston’s Head Coach Lavar Williams had this to say about his team’s performance.

One thing you can’t help but notice from the stands is the love this team has for one another.  Each time someone stepped up to the plate, everyone in the dugout was screaming words of encouragement.  One thing I heard said a few times was “I believe in you.”

The Red Devils take on Chiefland at home on Tuesday night.