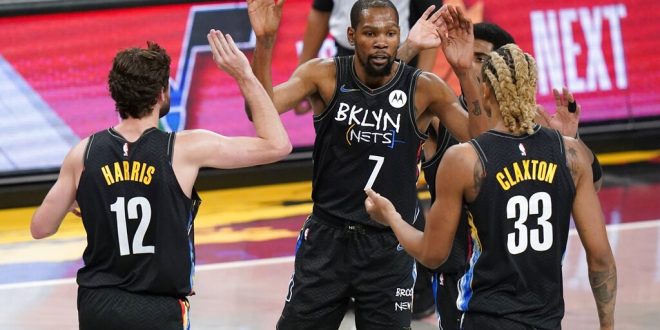 Kevin Durant Returns to Action for the Nets

Durant suffered a hamstring injury in the Nets’ Feb. 13 game against the Golden State Warriors. While initially believed to be minor, further tests revealed that the injury was more severe than expected.

Given Durant’s history with injury, including a torn Achilles that kept him out for the entire 2019-20 season, the Nets sided with caution.

Wednesday night was Durant’s first appearance in 23 games as the Nets defeated the New Orleans Pelicans 139-111. He was a last second scratch from the starting lineup, but was highly effective off the bench, scoring 17 points on 5-5 shooting. He also recorded seven rebounds, five assists and six turnovers. The Nets’ decision to start Durant on the bench came from a desire to allow him to be a presence down the stretch in the game.

Despite his minutes restriction, Durant said he expected to go into the game and play the way that he normally plays. He added that he felt good the whole night and didn’t feel the need to ease into a game that was already fast-paced.

Durant only played 19 minutes against the Pelicans, but believes he’ll be back in the normal rotation in a few games.

The Nets now feature one of the most star-studded lineups in the NBA. The major problem has been keeping them all on the court at the same time.

Durant’s return from a nearly two-month absence came only a few days after the Nets announced that fellow star James Harden would miss at least four games due to a hamstring injury of his own. Point guard Kyrie Irving has missed his share of games as well this season due to injury maintenance and personal issues.

After the game, Durant spoke on the veteran players that have stepped up with starters missing time and their importance as the season progresses.

For the first time, Durant shared the court with Blake Griffin and LaMarcus Aldridge, who signed with the team in March. Durant said that even while on the bench, he constantly communicated with Griffin and Aldridge, building rapport through practices and film sessions.

Nets head coach Steve Nash spoke on Durant’s presence on the court and how he makes the team better. He mentioned Durant’s ability to create opportunities for his teammates and the emotional boost that he brings to the team.

The Nets will play their next game Saturday as they host the Los Angeles Lakers. The Nets have not announced whether Durant will start or if his minutes will be restricted. However, it is expected that he will continue to build on his most recent performance.

Previous Young Talent Shine in Magic’s 131-116 Loss Against the Wizards
Next Miller Moving Out: Who Will Take the Reins for Arizona Men’s Basketball?