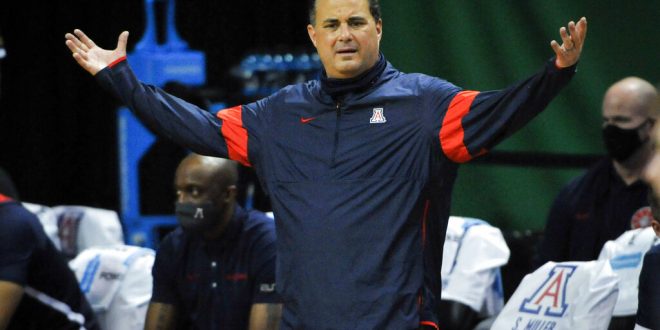 FILE - Arizona head coach Sean Miller questions a call during the second half of an NCAA college basketball game against Arizona in Eugene, Ore., in this Monday, March 1, 2021, file photo. Arizona has parted ways with men's basketball coach Sean Miller as the program awaits its fate in an NCAA infractions investigation, a person with knowledge of the situation told The Associated Press. The person told the AP on condition of anonymity Wednesday, April 7, 2021, because no official announcement has been made. (AP Photo/Andy Nelson, File)

Miller Moving Out: Who Will Take the Reins for Arizona Men’s Basketball?

Miller turned in consistent successful performances since arriving at Arizona in 2009. He led his Wildcats to the NCAA tournament seven times and the Elite Eight three times. In addition, Arizona won five Pac-12 regular-season titles during his tenure.

Despite his squad’s superior efforts on the hardwood, Miller soured his reputation off the court. His staff was charged with academic misconduct in March and encountered more legal troubles that resulted in a self-imposed postseason ban last season.

Associate head coach Jack Murphy will serve as interim head coach until the school can find a permanent replacement. So, who will step in to take over a program that succeeded on the court and struggled off of it recently? ESPN college basketball insider Jeff Borzello has a few ideas.

Prior to his Arizona gig, Miller coached the Xavier Musketeers to four NCAA tournament berths in five seasons. Likewise, one popular name to fill his shoes is from out of town; Gonzaga assistant coach Tommy Lloyd.

Borzello said that Lloyd is an elite international recruiter. It’s an important aspect for a potential Arizona head coach because the roster is chock-full of international players (seven).

But, it’s uncertain as to whether Lloyd will leave a powerful Gonzaga program that nearly recorded a perfect season and national title in 2021. Also, the legal trouble surrounding Arizona could turn him away.

Arizona Alumni Who Could Return Home

Some Arizona alumni could look to return to their former home. Borzello said he think Arizona could follow in the footsteps of Indiana and North Carolina and keep it in the family for its next head coach.

Sacramento Kings head coach Luke Walton, who played at Arizona, already said he has no interest in the head coaching opening. But there are several other alumni who could assume the role.

"No interest. I love Arizona and I think Sean Miller did an amazing job there in his time. I have a job. I have a job I love. I have a group I love working with. I'm very committed to being here in Sacramento." -Luke Walton on Arizona job

Pacific’s Damon Stoudamire, Georgia Tech’s Josh Pastner and Los Angeles Lakers assistant coach Miles Simon are three names that Borzello expects to be in the conversation. Also, BYU head coach Mark Pope was linked to the job during the season. And Arkansas head coach Eric Musselman is another wildcard with a chance to wind up in Tucson. 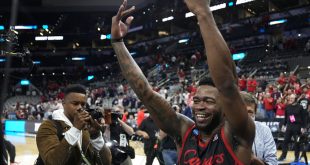