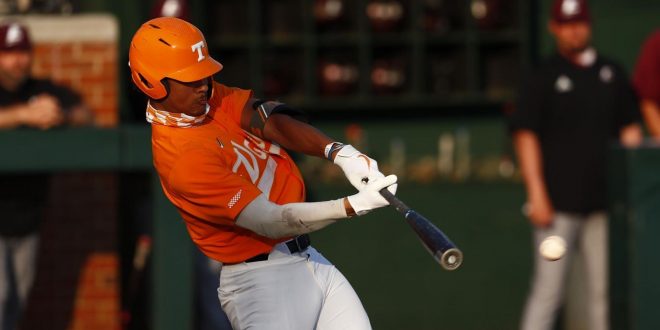 No. 6 Tennessee Volunteers prepare to host the No. 10 Florida Gators

The No. 6 Tennessee baseball team gears up this weekend for an SEC match up hosting the No. 10 Florida Gators.

Tennessee Volunteers baseball team enter this match up against the Florida Gators this weekend coming off a 2-1 series win over Alabama and a mid-week win against Eastern Kentucky 10-1.

The Volunteers host the Florida Gators in a three-game series that starts April 9, in Knoxville Tennessee. First pitch is set for 6:30 p.m.

This weekend is a big weekend for the Tennessee Volunteers baseball team marking it the first time that there has been two top 10 teams matched up in the Lindsey Nelson Stadium, since April 2004 when the Vols where ranked No. 10. The Volunteers welcomed then No.7 LSU Tigers to their stadium, where they won the opening game, but Tigers went on to win the series 2-1.

The last time the Volunteers met with the Gators, was May 12, 2019 in Gainesville. Florida won the opening game, but Tennessee went on to win the weekend series.

This is Tennessee highest baseball team ranking since 2001 after finishing at No. 4 in the NCBWA ranked in the USA Today and Collegiate Baseball news.

Head Coach Vitello, had this to say about his key to his success for Tennessee season so far:

“Not one magical thing has really change besides minor projects around the facility every month is a project to help the the team, adjustment in practice, weight room, recruiting and and each week has been improvement as a whole.”

Chad Dallas starts off the weekend as the Volunteers pitcher for the weekend against Florida. Dallas has been 4-0 on the season.

Up Next for The Vols

The Gators Baseball team are coming off a weekend 2-1 series win over the Ole Miss Rebels  and two mid-week wins against Florida A&M and and Stetson University.

Tommy Mace is set to be the opening pitcher for the Gators on their first game against the Volunteers.

Florida leads the overall series against Tennessee marking it, 153-87 wins. away in Knoxville 66-46, and home in Gainesville 83-41.