The SEC had an arguably struggling year in basketball in 2020-21 as opposed to past years. But the 2022 season should prove to be much more interesting. The transfer market has exploded in recent years with over 1,000 players currently in the portal, leaving teams plenty of room to begin restocking for 2022.

The 2021 season was filled with surprises, such as the Alabama Crimson Tide rising through the ranks. So it should be no surprise the Crimson Tide is now reloading with some high-profile players. Since the close of the 2021 season, Alabama has added on some recent commits in Noah Gurley and Nimari Burnett.

The 6-foot-4, 190-pound guard is coming off the 2021 season with the Red Raiders averaging 5.3 points per game, 1.8 rebounds, 0.9 assists, and 0.5 blocks. With his big frame, Burnett should be a weapon in overpowering defenders for Alabama. He should excel off the ball and be versatile shooting deep.

It will be interesting to see how Burnett can improve at the Crimson Tide, alongside the addition of forward Gurley. These recent commits should make valuable weapons in a promising Alabama program, potentially earning another tournament title-winning season.

The Razorbacks should be a strong contender in 2022 with their success in the transfer portal. Although losing 6-foot-8, 210-pound forward Ethan Henderson, the hogs have inked Au’Diese Toney and Chris Lykes.

In the 2020-2021 season, Pitt transfer Toney averaged 14.4 points per game with 5.9 rebounds and 2.3 assists. A 6-foot-6, 210-pound guard, he should be a premiere defensive weapon for the Razorbacks. Since starting his time at Pitt three years ago, Toney has made some steady improvements as a player. As an always developing, Toney should bring exciting energy to Arkansas’ defense.

The 5-foot-7 point guard transfer Lykes will bring explosive energy with him at the lead guard spot. He averaged 15.5 points per game, 5.5 assists, and 4 total rebounds. Lykes has a tremendous amount of energy with speed to back it, hopefully bringing that speed to the building Arkansas offense.

As three of the Tigers’ key players have declared for the NBA draft, LSU has some major holes to fill. Although will be missing Trendon Watford, Darius Days, and Javonte Smart, the Tigers have found some options to fill the gaps with Xavier Pinson and Seneca Knight.

The 6-foot-2, 170-pound point guard transfer Pinson is bringing some good news for the Tigers. LSU should have a strong deep backcourt with the addition of Pinson. During his 2020-2021 season at Missouri, Pinson averaged 16.3 points per game, 2.9 assists, and 2.7 total rebounds.

As a 6-foot-7, 215-pound guard, San Jose State transfer Knight has a career average of 11.5 points per game with 4.3 rebounds and 1.8 assists. Although LSU is losing its core group on the court, these talented additions should help put the Tigers back on path to dancing.

Although the 2020-21 season did not go as anticipated for most teams in the SEC, 2022 is showing some promise for all programs with some help from the NCAA Transfer Portal. It will be interesting to see if the Alabama Crimson Tide will keep their seat at the top or if these building SEC teams will make some powerful contenders. Keep an eye on how each of these transfers will bring some energy to the court this upcoming season.

Tori Edwards is a fourth-year Telecommunications student specializing in News with an outside concentration in Sport Management. Tori works as an author and reporter for WRUF.com and is the voice of trendings on Monday afternoons on ESPN 98.1 FM - 850 AM WRUF. You can reach Tori at victoriaedwards@ufl.edu.
@ToriEdwardsNews
Previous NFL Draft talk with Ben Linsey
Next Gators Gymnastics Seek Ring At Nationals 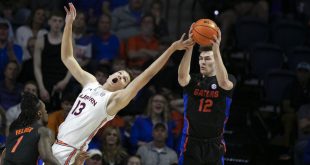