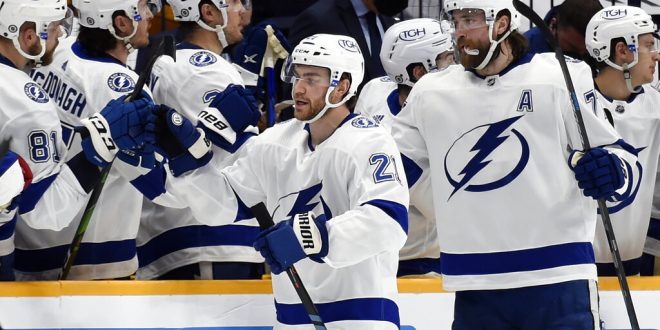 Tampa Bay Lightning center Brayden Point (21) is congratulated after scoring a goal against the Nashville Predators during the second period of an NHL hockey game Tuesday, April 13, 2021, in Nashville, Tenn. (AP Photo/Mark Zaleski)

The NHL trade deadline has come and gone this week and, with it, several of the contenders loaded up on even more talent. The Colorado Avalanche, Tampa Bay Lightning and Boston Bruins each added depth at the deadline on Monday to solidify their case as playoff contenders.

ESPN hockey analyst Barry Melrose joined Sport Scene with Steve Russell on Tuesday to break down the deadline. Here’s where it all stands.

The Lightning acquired defensemen David Savard and Brian Lashoff from the Columbus Blue Jackets on Monday. So, who is Tampa Bay getting in a veteran defender like Savard? The 30-year-old is a tough right-shot defenseman, and Lightning General Manager Julien BriseBois said he expects Savard to be key should the Lightning make a deep playoff run.

Barry Melrose said that he sees the Lightning as the team that improved the most at the deadline. Both the addition of Savard and the looming return of Nikita Kucherov will be key for the Bolts.

Kucherov led the Lightning in scoring in each of the past five seasons. After injuring his hip in December, he has sat out the entire regular season but is expected to return on time for the playoffs.

The Bolts sit in a tie atop the Central Division with the Florida Panthers and Carolina Hurricanes. They enter a decisive six-game homestand featuring series with the Panthers and Hurricanes that should shake up the division. But which teams outside their division can threaten the Lightning?

After the deadline, the Colorado Avalanche look like they could be the team to beat.

The Colorado Avalanche lead the NHL with 64 points at the top of the West division. As the NHL’s best team, and one that boasts great depth, the Avalanche didn’t have to make any moves at the deadline, but they did. They sent forwards Josh Dickinson and Ryder Rolston to the Blackhawks for Carl Soderberg.

Soderberg returns to Colorado after playing with the Avalanche from 2015-2019. With the pickup, the Avalanche get depth at defense in preparation for a playoff run. But possibly more important, they get familiarity and leadership from the 35-year old.

Melrose said he expects Colorado to pose the biggest threat to the Lightning winning the Stanley Cup again.

The Boston Bruins also won at the trade deadline, getting left-wing Taylor Hall from the Buffalo Sabres. The 2017-2018 Hart Trophy winner finally gets his chance to play for a contender in the Bruins. Hall isn’t still playing to that MVP caliber that he did when he won the trophy. But even still, he’ll have one of the biggest impacts of any player dealt at the deadline.

Hall wanted to land in Boston after spending his career with the Oilers, Devils, Coyotes and finally Sabres. The Bruins hold the last playoff spot in the East, sitting at fourth place with 50 points. They could use Hall’s presence in the office, as they only carry a plus-five goal differential, which is the worst of any team in playoff position.

Melrose told Steve on Sport Scene that he expects Hall and Boston to benefit each other.

I'm a third-year student at the University of Florida passionate about storytelling and sportswriting. My goal is to work in communications for a professional sports team after I graduate.
Previous Magic Snap Six-Game Skid, Beat Bulls 115-106
Next Heat fall to Nuggets, Jokic Records Triple-Double 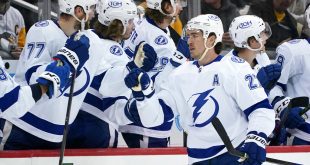