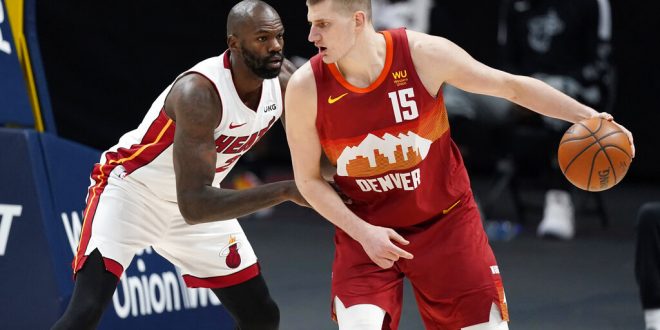 The Miami Heat have now lost their second game in a row as they fell to the Nuggets last night 106-123. Nuggets center Nikola Jokic was the star of the show, recording his 15th triple double of the season.

the trip moves on pic.twitter.com/lq2ExHVoxr

Last night’s game was the first for the Nuggets without star player Jamal Murray, who suffered a torn ACL in Monday’s game against the Warriors. However, the rest of the team stepped up in his absence, with six Nuggets players scoring in the double digits.

The performance of Jokic was the most notable among the group as the big man finished with 17 points, 11 assists and 10 rebounds. Forward Michael Porter Jr. also had a strong outing, recording 25 points and 10 rebounds.

For the Heat, this was the third game without Victor Oladipo, who was acquired from the Rockets at the trade deadline. Oladipo suffered a knee injury during Miami’s victory over the Los Angeles Lakers last week.

The Heat started the game strong with a 10-point first quarter from Bam Adebayo. Miami lead the game for much of the first quarter and a half before the Nuggets showed themselves to be the stronger team, opening up an 11-point lead by halftime. The Heat were unable to close the gap in the second half, eventually coming up short by 17 points.

Despite the loss, the Heat had their share of strong performances as well. Adebayo lead the team in scoring with 21 points, while Jimmy Butler recorded 13 points and nine assists. Kendrick Nunn added to the scoring as well, contributing 16 points.

However, the largest disparity on the stat sheet was in the rebounding category. The Nuggets out-rebounded the Heat 43-30 on the game. Much of this dominance came on the offensive glass, where they excelled by an 11-4 margin.

The Nuggets also held the advantage behind the 3-point line, converting at an efficient 47.2 percent, compared to the Heat’s 40.6 percent.

The Miami Heat now sit just above .500 at 28-27, which is good for seventh place in the Eastern Conference. Their loss to the Nuggets marks their second in a row after falling short to the Phoenix Suns on Tuesday. They will look to stay above the .500 and remain in a playoff position as they wrap up their road trip out west on Friday night against the Minnesota Timberwolves.

The Timberwolves currently sit at last place in the Western Conference at 14-42. They will also be coming off of a two-game skid after losses to the Bucks and the Nets this week.

Tip-off for the game will bet a 8 p.m. Eastern Time.

Previous Where does the NHL Stand After the Trade Deadline?
Next Astros Place Five Players on Injured List Due to COVID19