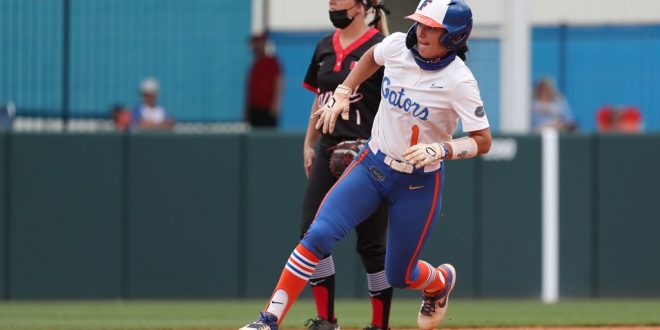 The fourth-ranked Gators softball team faces their biggest test of the year this weekend, traveling to Tuscaloosa to take on the third-ranked Alabama Crimson Tide. The Gators will begin a three-game series with the Crimson Tide starting tonight, with first pitch of game one set for 7 pm.

Despite a mid-week loss to the 23rd-ranked UCF Knights Wednesday, the Gators look to get their bats going after an unusually quiet offensive night. The team only managed to get three base hits, as UCF pitching was able to quiet a usual dominant Gator offense.

Gator pitching will have their work cut out for them this weekend, as the Crimson Tide leads the SEC in runs (84), hits (123), RBI’s (78) and walks. Moreover, the Crimson Tide have five hitters batting over .300, with Alexis Mack leading the way batting .429.

Coming into the series with the best opposing batting average (.193) and second-best ERA (1.56) in the conference, the Gators pitching staff will look to contain the Crimson Tide offense, who has led the team to six wins out of their last seven games. Elizabeth Hightower leads the Gator pitching staff, looking to win her 15th game in the circle. With a 1.40 ERA, Hightower has kept opponents to a .153 batting average, striking out 81 batters.

The Crimson Tide are led by Montana Fouts and Lexi Kilfoyl in the circle, who are 13-2 and 11-3, respectively. Kilfoyl holds the better ERA with 1.56, but Fouts is not far behind posting a 1.62 ERA. Alabama has struck out 313 of their opponents with Fouts leading the way with 160 strikeouts of her own.

The rivalry between the Gators and Crimson Tide is one to talk about. Both teams stand two and three in the current SEC standings and are right behind each other in the National standings. The Gators have yet to lose an SEC series this season and the Crimson Tide have won four of their five SEC series.

The Crimson Tide holds the all-time advantage over the Gators, having a 41-37 all-time record against the Gators. The Gators are 13-17 when playing Alabama on the road, but the Gators held the advantage in the last series played in Tuscaloosa.

Crimson Tide head coach Patrick Murphy is excited to continue the rivalry against the Gators.

Games two and three of the series are set to begin at 2 pm on both Saturday and Sunday, with the Saturday game being televised on ESPN2.

Previous Lightning Bounce Back and Defeat Panthers in Overtime, 3-2
Next Jam-packed weekend for Gator sports