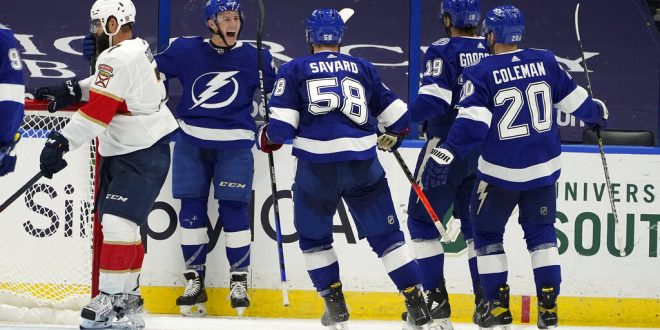 The Tampa Bay Lightning (29-12-2) defeated the Florida Panthers (27-12-5) Thursday night in overtime 3-2. The bounce-back win comes after a tough 7-2 loss against the Predators on Tuesday.

It only took 54 seconds into overtime for Tampa Bay to score the go-ahead goal and secure the win. Victor Hedman shot the game-winner on a breakaway from Alex Killorn.

The Panthers opened up scoring late in the first period with a goal from Patric Hornqvist, who was able to slip a backhand past goalie Andrei Vasilevskiy. Tampa Bay responded in the second period with a power-play goal by Killorn.

Florida stole the lead seven minutes into the third period. However, Ross Colton would score the equalizer just three minutes later. The score would remain tied at two at the end of regulation, forcing extra minutes and allowing for Tampa Bay’s fifth overtime victory this season.

Vasilevskiy made 36 saves and currently leads the NHL with 26 victories. He made 12 saves in the first period alone and also recorded an assist on Killorn’s goal.

With the win, Tampa Bay remains tied with Carolina atop the Central Division standings. The Lightning and Hurricanes are gearing up to face off next week.

Enthusiasm about the win was short-lived, however, with the team announcing that captain Steven Stamkos had been placed on long-term injury reserve with a lower-body injury. Stamkos will miss at least 10 games/24 days from when he was retroactively placed on the list, April 9. Tampa Bay will likely have to reconfigure their lineup for the remainder of the regular season to make up for Stamkos’ absence.

At the time of his injury, Stamkos led the team in total goals scored (17) and power-play goals (10). Although eligible to return for their game against the Stars on May 5, the Lightning are unsure if Stamkos will be ready.

Injury update: Steven Stamkos has been retroactively placed on LTI starting April 9 with a lower-body injury.

The Lighting and Panthers will play again on Saturday at 7 p.m.