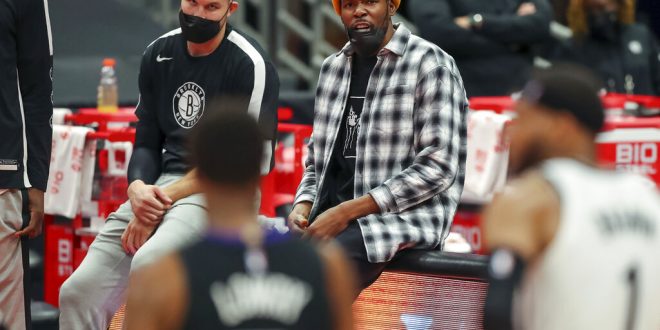 The playoffs are beginning to look dicey for the injury riddled Brooklyn Nets.

KD Down But Not Out

Forward Kevin Durant suffered a left thigh contusion when the Nets took on the Miami Heat on April 18. He is now listed as day-to-day.

Durant wasn’t the only Nets player to face to injuries in recent days.

Guard James Harden suffered a “setback” when attempting to rehabilitate his  right hamstring and will be out indefinitely.

When you have the caliber of players like Durant and Harden, you want them to be healthy for the post-season, said Adrian Wojnarowksi, analysist for ESPN.

Wojnarowksi also said Harden could miss the rest of the regular season. He would return when the playoffs start.

“I don’t know that we can just assume they’re going to be healthy all the time in the playoffs. They haven’t been in the regular season,” said Wojnarowski

While Wojnarowski thinks Harden is a durable player, he also thinks the hamstring injury may linger with him.

Path to the Finals?

Wojnarowski said the Nets will have to step up their defense to be competitive in the post-season.

“This is a Net’s team that has not been great defensively, better late in the season than they were early,” he said. “But you’re going to get in those situations in the post-season where you’re going to have to get stops and you don’t have a group on the court that has done together either.”

If No Harden, Kyrie and Chiozza Could be the Answer

If Harden misses any playoff games, guard Kyrie Irving and the Brooklyn Nets’ bench will need to step up to fill the empty shoes left by Harden.

Matthew Bell is a senior at the University of Florida. He completed his associates degree at State College of Florida in Bradenton and transferred to UF in 2019. His favorite sports are American football and baseball.
@@write_matthew
Previous Florida Volleyball Head Coach Mary Wise Reflects on Unprecedented Season
Next Gators Baseball Hits The Road For Series With Auburn