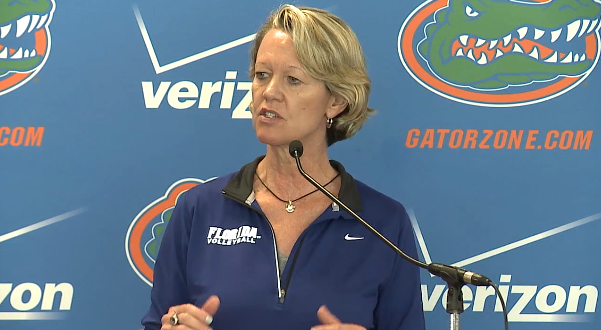 Tied up at 10 in the fifth set of the NCAA Volleyball Elite Eight, No. 8 Florida needed just five more points to knock off No. 1 Wisconsin. But the Gators lost five of the next seven points as they watched an unprecedent season come to an end Monday night in Omaha, Neb.

The Gators finished the season 21-4 overall and 19-3 in conference play, which trailed only No. 2 Kentucky (19-1). The Wildcats are the only remaining SEC team in the Final Four as they aim to make history. “Two [more] wins and we’ll have our first SEC national champion volleyball team,” Wise said.

Due to COVID-19, Florida’s schedule was far from the norm. The SEC was one of only four conferences that chose to begin playing last fall. “We had to make sure physically that they were ready to go for the season,” Wise said.

Following a 6-2 start to the season, the Gators faced a two-month hiatus before they went on a 13-1 run leading up to the NCAA Tournament. Despite the scheduling gap, Wise believes it actually benefitted Florida.

Wise mentioned how volleyball was the first indoor sport to continue play during COVID, which made things especially difficult on the athletes.

Although Wise admitted her concerns regarding COVID protocol, the team embraced the challenge.

We asked more of this group, for a longer period of time, than any team in our history. And they delivered in a big way.

Once the NCAA revealed the tournament bracket, Florida prepared for the winner of Creighton and Morehead State and the latter prevailed. Wise noted the quick turnaround in NCAA Tournament matches. After they defeated Morehead State in straight sets, the Gators had only two days to prepare for Ohio State. But Wise said Florida had its eyes set ahead to the next round’s matchup against Wisconsin.

The Badgers defeated BYU in their Sweet Sixteen matchup, but the teams faced off Saturday because BYU isn’t allowed to play on Sundays. Florida played Ohio State on Sunday, which meant Wisconsin had an extra day to rest and prepare.

Wise’s expectation for the Gators next season couldn’t be higher, though she admits next season won’t return to complete normalcy following the pandemic. “I’m so excited about the players that are coming in, the returning all-Americans,” she said. “We have the culture is going to be in place, I think it’s going to be a pretty special year.”

Hello, I am currently a junior at UF studying sports media journalism with a concentration in Political Science. I contribute web and radio content weekly for WRUF ESPN Gainesville. Be sure to check out some of my recent articles!
Previous Former Florida Assistant Coach Darris Nichols Named Head Coach at Radford
Next Can a Bruised Nets Prevail?