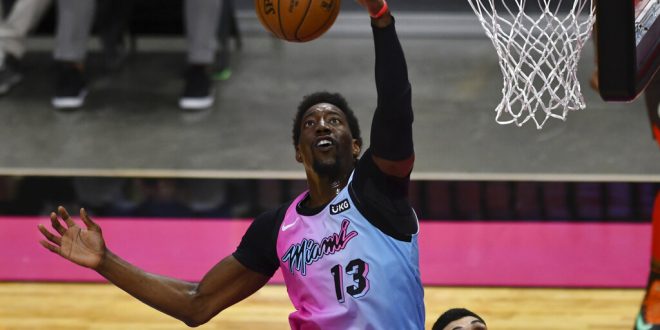 The Miami Heat (31-28) outscored the San Antonio Spurs (28-29) by 22 points in the second half of Wednesday night’s 107-87 road win. The low-scoring affair marked Miami’s third win in it’s last eights games that the Heat have held their opponent under 100 points.

Center Bam Adebayo did the heavy lifting for Miami leading the all players in points, while leading his team in rebounds. The Heat’s star dropped 23 points and pulled down eight boards while dishing out five assists in the win.

Guard Tyler Herro also had a big night off the bench for Miami. Herro had just eight points heading into the fourth quarter before scoring 14, 12 of which came on four 3 point field goals, of the Heat’s 30 points in the period to help take home the win. Herro’s 22 points helped Miami’s bench outscore San Antonio’s 44-31.

The Heat’s stifling defense kept any of the Spur’s players from scoring 20+ points. DeMar DeRozan led the way for San Antonio with 15 points. Derrick White had 13 points and seven assists giving the Spurs its’ best performance of the night.

Adebayo, Herro and Jimmy Butler, who had 18 points, led all scorers on both sides Wednesday evening.

San Antonio will look to bounce back into playoff position with a win against the Detroit Piston’s on Thursday evening. The Spurs sit just one game behind their division rival Memphis Grizzlies for the Western Conference eight seed.

a dub the size of Texas pic.twitter.com/iX3ECY0vRz

Miami’s Friday night matchup against the Hawks in Atlanta could prove to be a big one. Both Southeast Division foes currently sit within a game of each other in the Eastern Conference playoff standings. The visiting Heat currently sit at the seven seed while the home town Hawks (32-27) have the five seed.

With the four4 through the seven seeds all within two games of each other, the two teams could easily find each other facing off in the opening round of the playoffs. They have played each other twice this season splitting the two match ups. The winner of Friday night’s game would earn the tiebreaker if the two team’s finished with the same record.

Miami, winners of three straight, will also look to continue their hot streak in Atlanta after a rocky recent stretch due to key team injury’s.

Atlanta has also been playing their best basketball this season posting a 7-3 record over their previous 10 games. Hawks star guard Trae Young, who suffered a left ankle sprain against the New York Knicks on Wednesday evening, will receive an MRI on Thursday to help determine his status for the match up.

Previous TopGolf Live at the Swamp
Next Rays Fall in the Ninth, Marlins Get the Shutout