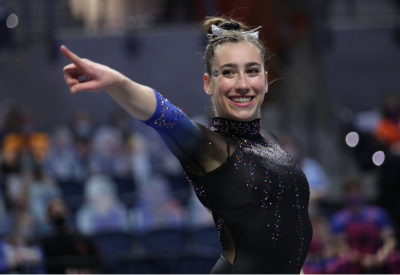 University of Florida Gymnast Leah Clapper during their meet against Auburn. (photo courtesy of floirdagators.com)

The average daily routine of a student-athlete usually consists of school, practice and competition without room for variance.

But Gators gymnastics junior Leah Clapper has developed several hobbies like posting on her food blog and podcast. She achieved these goals while she starred for the best gymnastics team in the country.

For her hard work in the classroom, she took home the 2021 SEC Scholar-Athlete of the Year.

Clapper earned a 3.98 GPA while dual-enrolled. She is set to finish her undergraduate degree in Advertising this summer and has started classes for her Master’s.

Leah and her sister, Lily Clapper, launched their food blog on May 6, 2018, called “Zest and Finesse.” The title of her blog then evolved to the name of her podcast “Zest and Progress.”

So excited about this!! The first few episodes are out now 🤩 https://t.co/cBT6ykCOxH pic.twitter.com/4nUH2NgdCG

How it all started

Leah started a podcast because she felt it was one of the best ways she could help people.

Many people in the world picked up different interests during lockdown because of the COVID-19 pandemic. Leah carved out an affinity for educational and motivational podcasts. She found herself most often listening to these podcasts while she ate lunch or dinner.

She enjoyed these podcasts because she discovered a takeaway in each episode that could be applied in her life, she said. It inspired her late fall months to start her own.

“I love talking to people,” Leah said. “I love being in front of a microphone. I enjoy public speaking. I was really excited to be able to go out and interview people and bring motivational conversations to people.”

The podcast idea became seeded in her mind and eventually sprouted. The podcast names she originally generated didn’t stick because she didn’t want something similar to another podcast. But then she figured that she could use zest for life instead of food and rhymed finesse with progress.

Her first episode debuted Dec. 2020. In the two-minute introduction video, Leah said her podcast is about “bring fun unfiltered motivation and refreshing conversations with athletes and inspiring people.” She also hopes to energize her listeners to bring change to the world around them.

She has posted eight episodes so far with most of her teammates, coaches and trainers as guest stars throughout the Gators season.

Senior Megan Skaggs appeared on the fourth episode. She was amazed at how quickly Leah turned a dream into reality. Skaggs mentioned that she wanted to start one over Christmas break and then quickly had it up the following week.

“That girl is just amazing,” she said. “She has so many great perspectives that she shares on the podcast. It’s been great to see her share her leadership lessons through that podcast.”

Finding time for the podcast

Her teammates were blown away by how Leah manages her time so well. Junior Savannah Schoenherr has difficulty relating to her time management success. But she adores watching her grow and share her love for food, fitness and motivation with the world.

“I can barely manage practice and school,” she said. “It’s definitely stressful, and a lot of us still really utilize time management skills. It’s hard still, even though, I’ve been in college for three years to get all of my work done and manage everything properly.”

Schoenherr also guest-starred on the first episode of Leah’s podcast. They spent over 30 minutes where they spoke about the importance of being true to yourself. Schoenherr added in the episode that it has led her to greater happiness.

A junior Nya Reed appearance hasn’t materialized yet, but she hopes after the season that she’ll have more time to hop on an episode before the end of the school year.

Leah has always been an outgoing person, Reed said, and she remembered during their freshmen year that Leah talked about how she wanted to be different. It’s been inspiring to watch her grow from her food blog to her podcast.

Coach Jenny Rowland said she hasn’t found the time to listen to her podcast but is proud of her ability to find interests she’s passionate about besides gymnastics.

“It is really what my staff really tries to embody and tries to embrace our student-athletes to do,” she said. “We always tell them gymnastics is a very small piece of their life and to really find something you love doing besides gymnastics.”

Successful in and out of the gym

Schoenherr also enjoyed watching her shine on the mats this season, too. Leah has excelled in the gym. She posted her first career 10 on the balance beam versus No. 11 Kentucky. She recorded a score of 9.9 or better seven times on the event in 11 attempts and competed on the uneven bars and floor.

Leah helped Florida advance to the NCAA Championships when she registered a career-high 9.9 on the floor exercise in the Regional Final in Athens, Georgia.

But the Gators fell short in the National Championship Saturday despite an undefeated regular season composed of all ranked opponents.

However, Leah will continue to grow inside and outside of the gymnastics by continuing her podcast where as a senior she hopes to lead Florida to its fourth National Championship.

Zachary Huber is a senior journalism student specializing in sports media at the University of Florida from Jacksonville, Florida. He works at The Alligator, covering gymnastics and volleyball while working at ESPN Gainesville. Follow him on Twitter @zacharyahuber.
@@zacharyahuber
Previous P.K. Yonge’s Brandon Jeong and Kendrick Esguerra — Best Friends Turned Teammates
Next FEATURE: A legend, a coach and three players: How the Gator’s women’s tennis team Swedish connection was born 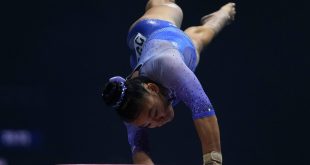