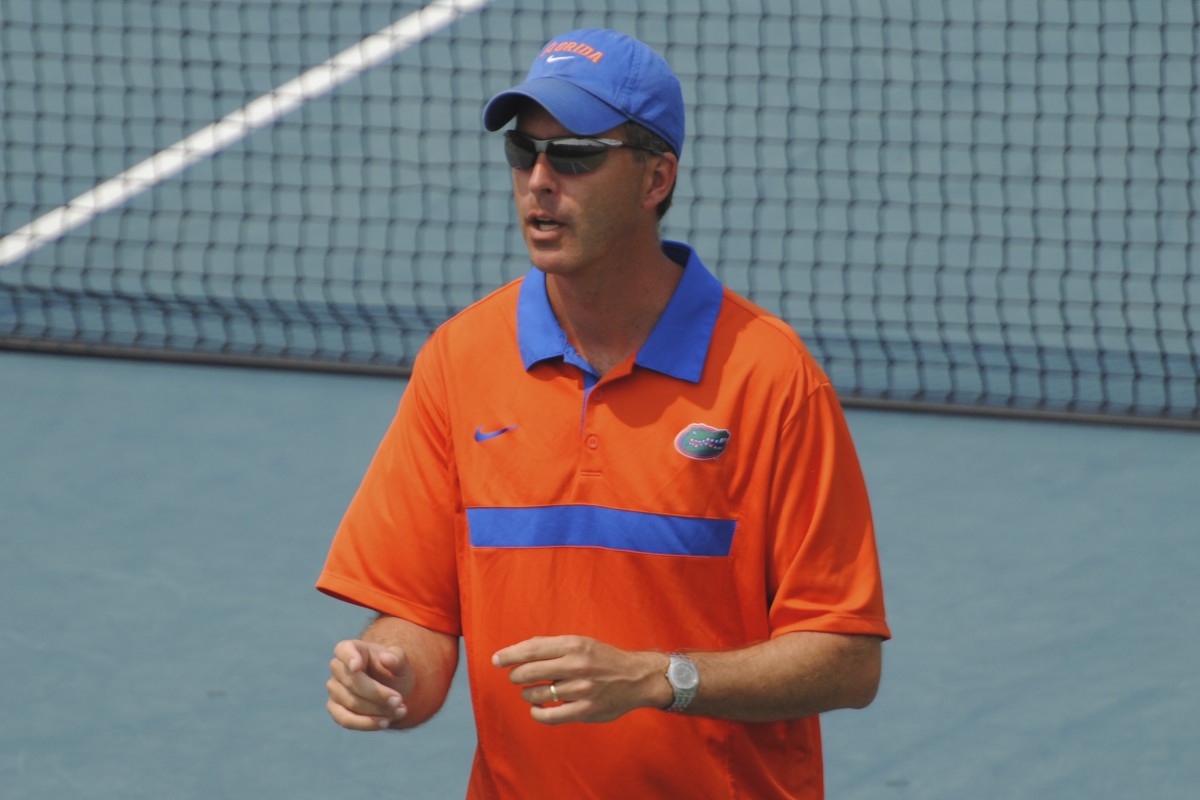 The Florida women’s tennis team consists of just seven players from around the world.

One would assume most players originate from large countries like the United States or Canada.

Yet nearly half of the Gators team emanates from a country with less than 10 and a half million people – Sweden.

Together, the four of them formed a Swedish connection on the team. One which prospered in part due to Jessica Lehnhoff.

Lehnhoff ranks as one of the greatest tennis players to don the orange and blue. The Guatemalan-born product arrived in Gainesville in 1998 as one of the top junior players in the world, someone who had already competed in the Junior French Open, Junior U.S. Open, and Junior Wimbledon.

Lehnhoff moved to Delray Beach, Florida, before coming to Gainesville, a fact that gave UF a leg up on the competition.

“I was No. 1 in the U.S., so I had a lot of interest from a lot of schools,” Lehnhoff said. “It was tough, but UF was always No. 1, and I took a visit and loved it. I actually canceled the rest of my visits.”

Lehnhoff also said her father was in remission for cancer at the time and wanted to stay close to home.

Her time at UF

She excelled in her first three years and was named singles and doubles All-American her junior year.

But her game jumped to the next level her senior year due to the arrival of Thornqvist.

“He was a big part of me becoming No. 1 in the nation and having a successful pro career,” she said. “I wish I got longer with him.”

She blew Thornqvist away with her ability.

“She’s probably the most talented player I’ve ever seen in college tennis,” he said. “The mere fact that I got to work with somebody like that in my first year was amazing.”

“He instilled a new passion in me and reinforced the belief in my tennis,” she said. “I remember he told me I was going to win singles and doubles at the All-American. And I told him he was crazy, but I ended up winning the singles and doubles and became the third person in American history to do that.”

She racked up honors her senior year and finished as the ITA National Senior Player of the Year and the SEC Athlete of the Year, just to name a few.

Thornqvist asserted the feeling of improvement was mutual.

“I learned a lot from Jessica in seeing how great the really good players are,” he said. “We formed a great connection that continues to this day.”

Lehnhoff’s dad passed away when was 19, and she said Thornqvist became a father figure and second family for her.

Gator great Jessica Lehnhoff stopped by the Tennis Complex and shared with us why it's so Great to be a @FloridaGators! #TBT #GoGators pic.twitter.com/DXVTzZcoG8

After graduating from Florida in 2002, Lehnhoff began her pro career, and afterward, started coaching. She coached in Florida, New York, and London before moving to Sweden, where her mother was from.

“I was so geographically close to Sweden when I was in London, and that’s where all my family was,” she said. “So, I decided to see what it was like to coach there, and I stayed for six years.”

While coaching, she discovered that many junior Swedish tennis players yearned for some guidance with understanding the American recruiting process, so she started a college placement company.

“It’s a great step towards the pro tour,” she said regarding college. “It gives you time to mature as a person and to further your skills as a player.”

The business boomed and now serves all of Scandinavia.

One of its clients was Berlin. She grew up in Buffalo, New York, before moving to Sweden when she was nine.

Berlin was late to the recruiting process and reached out to Lehnhoff, who helped her game immensely. Since Berlin is left-handed, Lehnhoff provided her with a lot of great tips.

“She was telling me all about UF and it sounded awesome, so I wanted to go there,” Berlin said.

Lehnhoff said she helped get Thornqvist to recruit Berlin and get her to Florida.

“She had been injured, so if you looked at her stats, they needed some assistance,” Lehnhoff said. “But I talked with Roland and explained to him that she’s got a lot of potential. I don’t want to take any credit away, but I think putting in a good word definitely helped the situation.”

Lehnhoff admitted that she pushes Swedes to attend Florida, but only ones of a certain caliber.

“I don’t want to send anybody there,” she said. “It has to be someone who can give Roland good results. I played for Roland, so I have a closer bond with him than any other country in the country.”

Jarlskog didn’t work with Lehnhoff and in fact, kicked off her college career at Georgia Tech.

The Lund, Sweden, product said she expressed interest in Florida, but the feeling wasn’t mutual.

“I sent Roland a message, but he never replied, and afterward, she said ‘oh I never got the message,’” she said.

Despite liking the school, Jarlskog felt she failed to fit in on the team, so she looked to transfer. She met Thornqvist at a tournament and was hooked.

“It was really fun to speak some Swedish because I couldn’t do that at Georgia Tech,” she said. “We didn’t talk much, but I thought about it and the team seemed great and it was cool to play for a Swedish coach.”

She continued that it was hard to adjust to the U.S. at Georgia Tech, but due to Thornqvist, she felt more comfortable at UF.

“It’s so nice to be able to speak Swedish. You can really feel like we have a different connection,” she said. “Every time I speak to them, I feel more like home.”

Dahlstrom is the newest member of the Swedish group. She also didn’t work with Lehnhoff, but Lehnhoff knew of Dahlstrom since she played for her club in Stockholm – Salk.

Dahlstrom became enthralled with Florida when she played in the Orange Bowl Tennis Tournament when she was 12 and said from that point, she wanted to go to school in Florida.

As a freshman who joined the team during the COVID-19 pandemic, Dahlstrom dealt with a tougher adjustment than most but having Swedish teammates aided her.

“We get a special bond. The days I miss home a little more, I have these Swedish people around me,” Dahlstrom said. “Me and Ida also live together, so we can speak Swedish and watch Swedish TV and movies.”

Thornqvist said the trend of attracting Swedish players is a new one.

“After Jessica left, we didn’t have any Swedish players until Ida showed up.”

He said a major reason for that is the athletes haven’t been good enough, and the ones who have decided to go pro instead of attending college.

“I like the fact that these players are going to go home and tell everyone about what kind of experience we have here and what kind of quality tennis we can offer here at Florida.”

Despite the benefits Thornqvist said that comes with calling up Swedish players, like being able to speak in his native tongue, Thornqvist said he doesn’t plan on focusing his attention on the region.

However, the recruiting seems to occur on its own. Thornqvist said he’s received many more emails from Swedes since Jarlskog and Berlin joined the squad.

Plus, he’s got an extra eye looking out for great fits.

“Jessica is a Gator through and through,” Thornqvist said. “Whenever she finds a good player, the first thing she does is send me a text. She’ll keep finding the excellent players, who befit the Gator Standard, for us.”