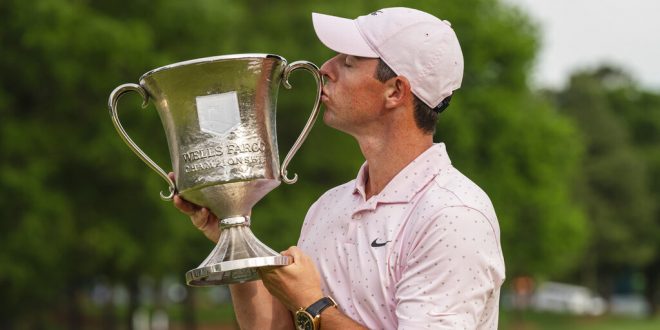 Golfer Rory McIlroy pulled off an impressive comeback victory at the Wells Fargo Championship on Sunday. After a year and a half drought, he finished the tournament 10 under par to defeat Abraham Ancer by one stroke.

McIlroy had this to say on winning his first tournament since the WGC-HSBC Champions in November 2019.

McIlroy and Quail Hollow have a special relationship dating back to 2010. A 2010 Quail Hollow Championship victory made McIlroy the youngest PGA Tour winner since Tiger Woods. At just 20 years old McIlroy placed himself as one of the top young golfers in the sport.

McIlroy noted the feeling of winning at Quail Hollow.

Despite the less than stellar first round, McIlroy would be nearly perfect for the next three rounds. A strong three rounds featured a 66-68-68 finish for the Ireland native. What makes the comeback so impressive is the strong play in the final three rounds.

The difficulty of the sport makes three consecutive, near perfect rounds a hard accomplishment to achieve. Now add in an 18 month slump and you can see why this tournament victory was meaningful for McIlroy and the rest of the PGA. In addition, the golfer thought he might not even play in the tournament due to a neck injury he suffered on Wednesday before the tournament.

However, what is making the victory most notable is the way it has mixed up the PGA rankings.

His final three rounds at Quail Hollow has many putting him at the top of their list as a PGA Championship favorite.