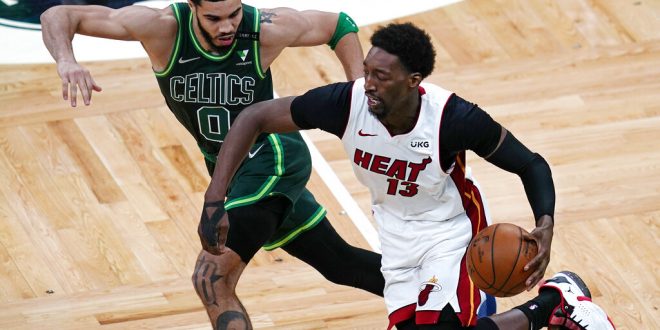 Miami Heat center Bam Adebayo (13) tries to outrun Boston Celtics forward Jayson Tatum (0) on a drive to the basket during the second half of an NBA basketball game Tuesday, May 11, 2021, in Boston. (AP Photo/Charles Krupa)

Miami clinched their 10th win in 13 games against the Boston Celtics to secure a spot in the playoffs. They have three games left in the regular season.

The win for the Heat pushed the Celtics on the edge of a play-in tournament. The win puts Miami tied with the Atlanta Hawks and a game and a half behind the New York Knicks, depending on their game tonight against the Lakers.

If the Knicks lose tonight, all three teams will have the same 38-31 record still having three games to go. Though the tiebreaker is not as simple as it may look. The Heat have the tiebreaker over the Knicks, Atlanta takes the top over Miami and New York has the tiebreaker with Atlanta.

The first half was a back-and-forth battle. The Celtics took the lead by two a handful of times, but Miami was not taking any defeat. The Heat led by 6 at the half, 62-56.

The second half was all Miami. The Heat led by 11 at the end of the third and never looked back.

Jimmy Butler had 13 before an eye injury caused him to miss the second half.

Kemba Walker had a season-high 36 points to lead the Celtics. Jayson Tatum racked up 33 points along with eight rebounds and six assists.

Boston has lost the last seven of ten and has three games left to play in the regular season.

Miami will host the 76ers on Thursday night.

The Heat lost both previous meetings in Philadelphia coming back in consecutive days in January.