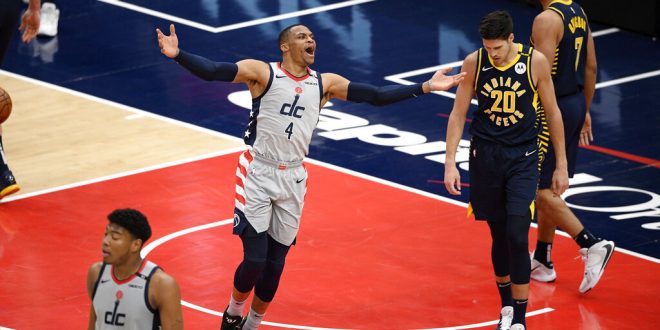 Wizards Advance to NBA First Round Against 76ers, Defeat Pacers

Things looked bleak for the Washington Wizards as they got off to a 6-17 start. The Wizards played furiously to reach the Eastern-conference play-in games. After they lost against the Celtics 118-100, their playoff hopes looked in jeopardy again.

Then, in celebration, amid a humongous lead with five minutes to go, Russel Westbrook threw his shoes out into the crowd.

The first-quarter scoring went back-and-forth, with Washington leading Indiana 30-29 at the buzzer.

The game hit a turning point when the Wizards broke the game open with a 15-0 in the second quarter.

The momentum continued in the third quarter, where the Wizards outscored the Pacers 48-31.

Russell Westbrook was upset with his performance in the initial play-in game against the Celtics. He utilized the advice of a former Thunder teammate to improve his play against the Pacers.

Armed with this mission, Westbrook scored 18 points and dished out 15 assists.

Fans in Capital One Arena chanted “We Want Philly” as the blowout concluded in the fourth quarter.

Wish granted, Westbrook had this to say in preparation for Joel Embiid, Ben Simmons, and the 76ers.

The Washington Wizards now begin their Eastern Conference quarterfinals duel with the one-seeded Philadelphia 76ers (49-23) Sunday, May 23 at 1 p.m.