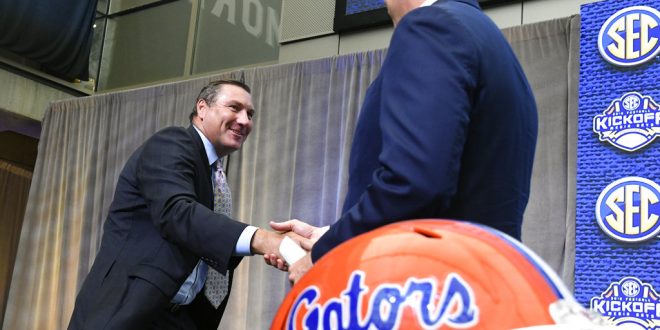 Florida head coaches Dan Mullen, Cam Newbauer, and Mike White will stay contracted with the Gators for the foreseeable future. Mullen and White extended their contracts through the 2027. While, Newbauer will remain at the head of Florida women’s basketball program until 2025.

The former National Champion winning offensive coordinator received a warm welcome from Gator fans when he took over as head coach in 2018. During his three seasons as head coach with the Gators, Mullen holds a 29-9 overall record.

Mullen’s contract will keep him with Florida until January 2027. Mullen will receive $7.6 million annually. Coach Mullen had this to say on his contract extension:

“We are very excited about the future of the Florida football program, and this agreement allows us to continue to build on the success we have enjoyed on and off the field, Mullen said. We want to thank the UAA Board, President Fuchs, Director of Athletics Scott Stricklin, and the entire University of Florida community for their support.”

Coach Newbauer earned a contract extension through 2025 earning $500,000 per year.

Newbauer recently completed his fourth season as head coach of Florida women’s basketball. Overall, the Gators have gone 46-71 under Newbauer since taking over in 2017. This past season, the Gators secured their first postseason victory since 2014 with a 66-65 victory over Charlotte in the WNIT.

Since taking over, Newbauer has placed an emphasis on the establishing the “We Over Me” culture. This extends to on court ball movement and working to impact the Gainesville community.

“Cam is building his program the right way and making steady progress. It’s important that he have the time needed to continue that progress.”

Coach White followed up with three more NCAA Tournament appearances the following seasons. The Gators were scheduled to appear in the 2020 NCAA Tournament that was cancelled due to COVID-19. However, Florida fell in the Round of 32 each of the past three seasons.

Stricklin noted this on coach White’s potential with Florida.

“Though he’s still relatively young by coaching standards, Mike has already established himself as a successful head coach. Because of his work ethic, intelligence and competitiveness his career has such a high ceiling, and it’s going to be fun watching what his Gator teams accomplish for years to come.”