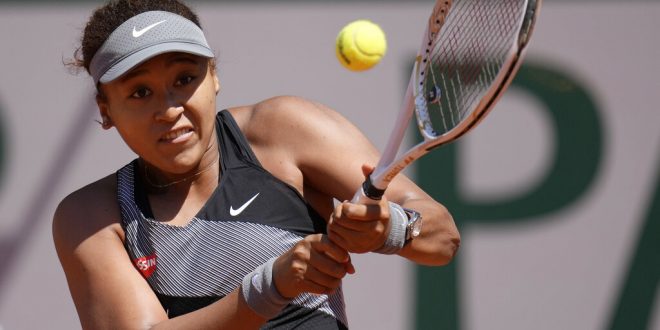 Japan's Naomi Osaka returns the ball to Romania's Patricia Maria Tig during their first round match of the French open tennis tournament at the Roland Garros stadium Sunday, May 30, 2021 in Paris. (AP Photo/Christophe Ena)

Tennis star Naomi Osaka withdrew from the French Open after being fined $15,000 for not speaking to French Open media. Last Wednesday, she posted that she would not talk to the media due to mental health.

In a Twitter post, Osaka stated she has suffered from depression since the 2018 US Open. She noted the difficulty she has experienced coping with her bouts of depression. Osaka also stated she is introverted and has been using headphones to help her deal with her social anxiety.

Right after her decision, the Roland-Garros referee fined her citing article III H. of the Code of Conduct.

“We have advised Naomi Osaka that should she continue to ignore her media obligations during the tournament. She would be exposing herself to possible further Code of Conduct infringement consequences. As might be expected, repeat violations attract tougher sanctions including default from the tournament (Code of Conduct article III T.) and the trigger of a major offence investigation that could lead to more substantial fines and future Grand Slam suspensions (Code of Conduct article IV A.3.)”.

According to the statement, players engaging with the media is an important element of the Grand Slam. Talking to the media helps the media to share players’ stories. It also allows players to share their story. It helps to the development and growth of the sport and the fan base of individual players.

The Grand Slam Tournament announced that they asked Osaka to reconsider her position. Due to the lack of engagement by Osaka, the Roland-Garros teams, which include the Australian Open, Roland-Garros, Wimbledon and the US Open jointly wrote to her to check on her well-being. The team offered support and suggested dialogue. They also reminded her of her obligation and the consequences of not meeting them.

The team also stated the resources they have available to help players’ well-being.

“The mental health of players competing in our tournaments and on the Tours is of the utmost importance to the Grand Slams,” the statement said. “We individually and collectively have significant resources dedicated to player well-being. In order to continue to improve however, we need engagement from the players to understand their perspective and find ways to improve their experiences. Every year we seek to deliver better experiences to our fans, our players and our people, and we have a long and successful track record in achievement on this count”.

Osaka has received a lot of support from her fans and her peers.

“Dear Naomi: You have nothing to apologize for. You made the right call: your physical and mental well-being comes first. And you owe them nothing. They merely provide the stage for you to display your excellence. This should be an occasion for THEM to search their souls”.

Additionally, Osaka is not the first athlete to talk about mental health.

On Tuesday, the tournament issued another statement to offer Osaka support and assistance. A piece of the statement read:

“Together as a community we will continue to improve the player experience at our tournaments, including as it relates to media.”