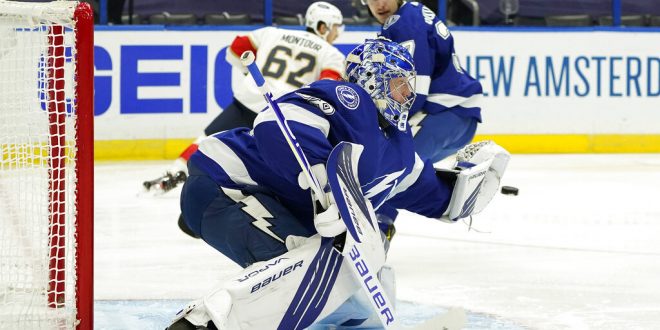 Tampa Bay Lightning goaltender Andrei Vasilevskiy (88) makes a save on a shot by the Florida Panthers during the first period in Game 6 of an NHL hockey Stanley Cup first-round playoff series Wednesday, May 26, 2021, in Tampa, Fla. (AP Photo/Chris O'Meara)

Vasilevskiy leads Lightning to victory over Hurricanes in Game 2

Vasilevskiy carried his team in the net leading the Lightning to a 2-1 victory against the Carolina Hurricanes Tuesday night.

It looked like Vasilevskiy was going to deliver a shut out until the final minutes of the third period. Andrei Svechnikov shot one in the back of the net for the Hurricanes.

Killorn was the first to get the Lightning on the board. He was able to sling a shot straight passed Alex Nedeljkovic about 7 minutes into the second period. Killorn’s goal makes the sixth game in a row where the Carolina surrenders the first goal of the game.

Cirelli added to the Tampa Bay lead by using a pass from Victor Hedman’s and racing past Brady Skjei to the net giving Tampa Bay a 2-0 lead 8 minutes into the third.

Vasilevskiy finished with 31 saves. He has been named one of three finalists for the Vezina Trophy presented annually to the league’s top goaltender. That came two days after he made 37 stops in Game 1 with 15 saves in the opening period.

Unfortunately for Carolina, both games at home ended the same. They ended up down 2-1 playing the final minutes of the game with an open goal and no luck.

“It was a pretty good game, played pretty hard,” Carolina coach Rod Brind’Amour said. “You’re playing the best team in the world and we’re going toe-to-toe, that’s how it feels like, that’s for sure. Certainly not getting overwhelmed. We just didn’t get a break.”

Tampa bay is heads back to home ice Thursday for the next two games with a 2-0 lead and a chance to sweep.

Previous Nine SEC teams reach the NCAA Tournament.
Next Nets finish round one of NBA Playoffs over Celtics; Nuggets and Suns lead 3-2