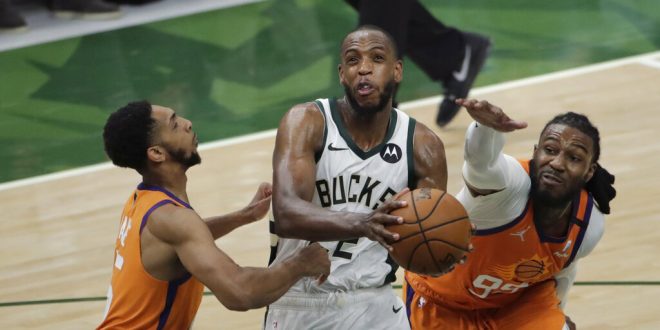 After 40-plus performances from Khris Middleton and Devin Booker, the Milwaukee Bucks prevail and take Game four, 109-103.

“Throws it up for Ayton, blocked by Antetokounmpo!”

That’s just about all you need to know from Game four, as Mike Breen called a game changing block from Giannis down the stretch. The turnaround rejection on the Suns big man was an instant highlight as seen below.

After being tied at halftime, the Suns took a six-point lead going into the fourth quarter and even stretched it to nine in the opening minutes. After trimming the lead to two with a little over two minutes to play, Middleton took over and made the next two baskets followed up by a Superman-esque block by Antetokounmpo keeping the Bucks in front. The Suns never had a response and Milwaukee was able to tie up the series as a result.

For the Suns, Devin Booker could not get his team over the hump with his 42 points and Chris Paul had an uncharacteristic night with 10 points and five turnovers. Paul had five out of the Suns 17 turnovers, but Coach Monte Williams isn’t too concerned.

“In my eyes, it’s a blip on the screen. When we have played like this, we usually bounce back.”

Splitting the first four games, both teams have dominated on their home court. In the 2021 NBA playoffs, the Milwaukee Bucks have put up an unstoppable 9-1 record. The Suns have not been bad as well going 8-2 in that stretch. So, who will crack first in front of their home crowd? Time will tell, but The Valley and The Deer District have been there when it has mattered most for their teams.

CP3 knows that his team has to be better to take back the lead:

Back in Phoenix for Game 5, the new best-of-three series starts at 9 p.m. on Saturday.