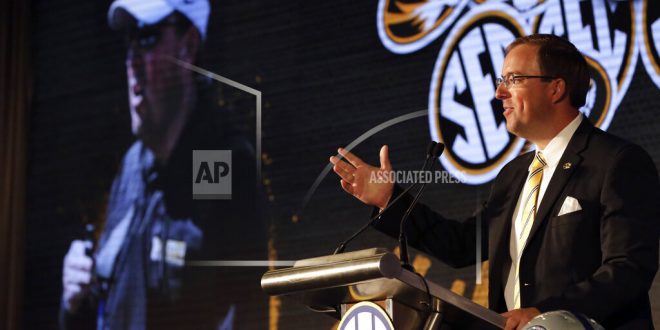 The final day of SEC Media Days is in the books after Missouri took the stage with second-year head coach Eliah Drinkwitz, Akial Byers, and Case Cook. Here are the biggest takeaways from the final day in Hoover.

Eliah Drinkwitz said he learned a lot about knowing who you are and how tough you have to be after experiencing his first year as the head coach for Missouri. Drinkwitz went on to say that there’s a lot of ups and downs but has to continually keep a game face on to set the tone and leadership for the organization.

Drinkwitz was asked about why he started Conner Bazelak as quarterback during his freshman year and said he doesn’t worry about an individual’s age.

“There’s a verse in the Bible that talks about, ‘don’t let anyone look down on your youth, but show yourself approved by your conduct, your act and your speech,'” Drinkwitz said.

Drinkwitz stated that Rakestraw proved he could make plays by demonstrating those abilities through his work ethic, film study, and taking care of the football.

Drinkwitz had high praise for Ennis Rakestraw. The head coach thought he was a tremendous young man and competitor during his freshman year. Drinkwitz will have Rakestraw working more on his breaks on the passes, as last year, he played more man-to-man coverage. Overall, Rakestraw has been noted as making tremendous strides in the weight room and with weight gain.

Akial Byers was asked about his expectations for the upcoming season and stated that he’s excited about the improved defense. There are returning starters coming back, along with a couple of transfers from the portal. The transfers are experienced players, which Byers believes will help improve the D-line.

Byers also mentioned that the reason he changed his number to zero is that he wanted something different. Byers had been at Missouri for four years and has totally changed his mindset coming into his fifth season.

When asked about what made him want to come back to Columbia, Byers said he had left things on the table. However, Byers continued to say that he talked to a couple of guys on the D-line, and they think they have what it takes to win a championship this year.

Case Cook was asked about his thoughts on head coach Eliah Drinkwitz. Cook thought Drinkwitz’s energy would benefit the team as one guy’s energy can be contagious. Having that gameday atmosphere by feeding off of the fans’ energy will be essential when playing games.

Cook said that as a team leader, he must come in with high output every day. Cook has got to make sure that everyone on the team is doing all right and bringing “the juice.”