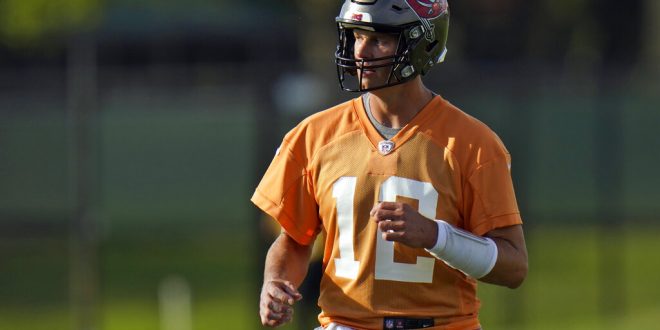 The 2021 NFL Training Camp is underway as all 32 clubs reported Tuesday. As for where every team stacks up entering camp, the goals of each franchise vary greatly. And there are plenty of interesting storylines across the league as camps kick-off.

The lingering question of the offseason regarding where Aaron Rodgers will play has finally been answered.

On Tuesday, Rodgers reported to the Green Bay Packers for the first time since last season’s loss to the Tampa Bay Buccaneers in the 2021 NFC Championship Game. By showing up, he will avoid the $50,000 daily fine for missing camp.

ESPN’s Adam Schefter explained how Rodgers’ plan as of last week was to not show up for training camp and sit out this season. But as talks intensified over the past weekend, Rodgers and the Packers were able to reach terms that successfully persuaded him to return for camp.

Schefter detailed the agreement and broke down several concessions the Packers made to Rodgers, including a void of the final year of his contract in 2023.

Schefter expanded on how the agreement favors Rodgers and sets up possible trade. The conditions agree to review his situation at the end of the season, giving him the freedom to decide where he wants to play in 2022.

Rodgers will return for his 17th NFL season and possibly his last dance in Green Bay.

The Houston Texans will hold their first training camp practice Wednesday. But as the team prepares to take the field, don’t expect to see much participation from Deshaun Watson.

Despite 22 active civil lawsuits with allegations of sexual assault and inappropriate behavior, Deshaun Watson reported to the Houston Texans facility on Sunday.

The Texans will listen to trade offers for Deshaun Watson, per @TomPelissero and @RapSheet

The QB reported to camp Sunday and reiterated that he wanted to be traded from Houston pic.twitter.com/cGR81ff7Nk

The NFL announced that as the review of the allegations is ongoing, there are currently “no restrictions” on Watson’s participation at the Houston Texans camp. If Watson had not reported to camp, he would have been fined $50,000 per day.

In January, Watson asked for a trade and attributed the decision to dissatisfaction with the direction the team was going. Although Watson remains on the team’s roster, the Texans said they are now open to trading Watson.

ESPN’s Anthony “Booger” McFarland explained how there are a few options for Houston and why he hopes Watson is traded.

The offseason may have been a relaxing time for the defending Super Bowl champions. However, head coach Bruce Arians said the celebrations are over.

As for being the team to beat in the upcoming season, the Buccaneers are looking forward to the challenge. Buccaneers’ running back Leonard Fournette talked with the media to further expand on how the defending champions are not getting complacent heading into the season.

“I know we’re the champs and everything, but it’s time to start all over. It’s a fresh start, you know. That’s, that’s in the past now. Like I was saying, nobody remembers who won the Super Bowl four or five years ago. I’ve been saying to focus on what’s next,” he said.

He also touched on how he is finding his bearings in Tampa and feels more familiar with his teammates as well as his routes.

“We have a lot of young guys, a lot of young talent that’s coming in and we know they can play. And our biggest goal is to teach them in the right way, let them understand what hard work really is,” Fournette said.

September 9 will mark the opener of the 2021 season when the Tampa Bay Buccaneers host the Dallas Cowboys.

Tori Edwards is a fourth-year Telecommunications student specializing in News with an outside concentration in Sport Management at the University of Florida. Tori works as an author and reporter for WRUF.com and is the voice of trendings on Wednesday mornings on ESPN 98.1 FM - 850 AM WRUF. You can reach Tori at victoriaedwards@ufl.edu.
@ToriEdwardsNews
Previous Oklahoma and Texas formally ask to join the SEC
Next Team USA Makes History: Katie Ledecky and Women’s 3×3 Basketball Take Gold