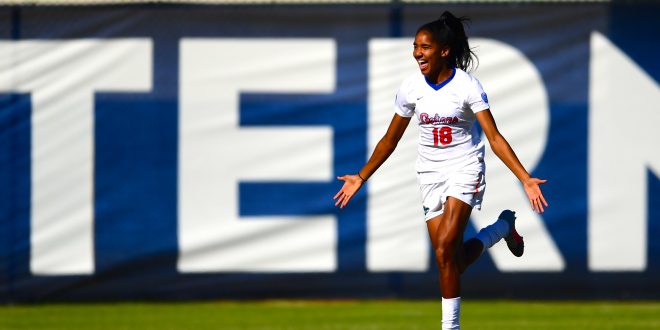 Florida Soccer to take on No. 2 North Carolina

The Florida Gators soccer team looks to stay in the win column tonight.

UF is coming off of a 1-0 win over the FGCU Eagles Sunday. With four saves, sophomore goalkeeper Alexa Goldberg recorded a shutout for the first time in her collegiate career. Prior to that, the Gators fell short to the No. 1 Florida State Seminoles 5-2 on Sept. 2.

Tony Amato’s offense averages 0.83 goals per game while its opponents average 1.83 goals per game. Sixth-year senior Kit Loferski leads the team in points with six (three goals), while junior Alivia Gonzalez trails closely behind with three points of her own. Though the orange and blue’s record so far hasn’t been above par, the gritty team repeatedly battles to the last minute.

UNC is riding a six-game win streak. The Tar Heels pulled off a 2-1 overtime win Sunday versus the No. 10 Stanford Cardinals. Senior goalkeeper Claudia Dickey played over 96 minutes in cage in order to secure the win.

Tonight will be the eleventh time the teams face off. The last time Florida and North Carolina met dates back to Aug. 24, 2012, in Chapel Hill, North Carolina, where the double-overtime game ended in a scoreless tie. The Tar Heels make their only second trip to Gainesville since Oct. 10, 1998.

The game can be streamed on SEC Network Plus.

Last night in Georgia, the Gators persevered through a three-goal deficit when they tied the …