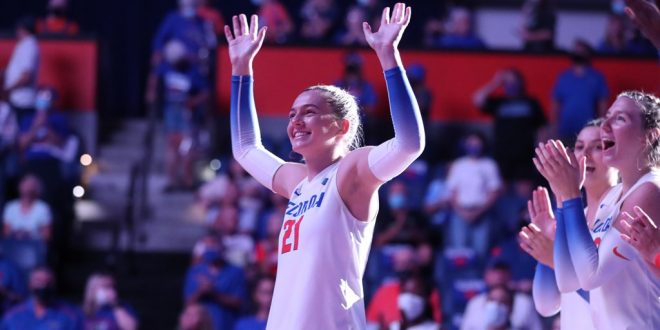 Scenes from the GatorsÕ 3-1 win against Minnesota. Photo by Emma Bissell

Florida Gators Volleyball will host the Baylor Bears this weekend for a two-match series beginning tonight at 8 p.m. The Gators are 4-1 thus far in the season as they last took down No. 10 Minnesota last weekend. Florida has only faced Baylor twice in history and the two have not competed since the 1991 season.

On top of the leaderboard with 60 kills and 36 digs thus far in the season, T’ara Ceasar plans to keep improving each time she steps on the court. Ceasar credits her success this season to the team’s ball control as the team has focused on their serve and pass battle each week in order to give setter Monserez every offensive option.

“If we can continue to chip away and just get even 2% better each and every day by putting our focus where it matters,” explained Ceasar, “I know that come NCAA time we’re going to be at our top performance.”

Furthermore, setter Marlie Monserez grabbed yet another SEC honor this week where she was named Overall Player of the Week and Setter of the Week. Monserez has contributed 183 assists to her offense this season, as well as 59 digs and 20 kills. Head Coach Wise stated that Monserez is playing with the full package.

Baylor brings a few weapons to their matchup in Gainesville as well. Coach Wise stated that Baylor is a very talented team where the Gators will need to bring their best.

Although Baylor is 1-3 on the season, the Bears are ranked at 17 and will bring a challenge to the Stephen C. O’Connell Center tonight at 8 p.m.

Parker Welch is a Senior at the University of Florida majoring in Sports Media at the College of Journalism & Communications.
@parkerrwelch
Previous Lady Hurricanes Sweep Saint Francis Catholic Wolves In High School Volleyball
Next Florida Soccer Routed by No. 2 North Carolina