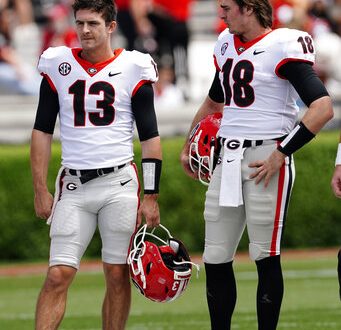 The Georgia Bulldogs (2-0) will host the South Carolina Gamecocks (2-0) in both teams’ first conference game of the season. The Bulldogs look to continue their defensive dominance, while the Gamecocks hope to pull off a major upset on the road.

There’s no question that this Georgia defense is the real deal.

The Bulldogs allowed only 180 total yards to the Clemson Tigers, the third ranked team at the time, in their opening game. Additionally, Georgia allowed 174 yards against UAB in week two. However, the Bulldogs may have to settle to start Carson Beck, their third string quarterback against South Carolina. JT Daniels and Shane Bennett are both dealing with injuries, and their status for Saturday’s game is unknown.

Daniels suffered an abdominal core injury in week one and was unable to play against UAB. Georgia head coach Kirby Smart said Wednesday that it’s important for Daniels to throw the ball down the field at 100% before he can play.

Despite the absence of Daniels Saturday, Stetson Bennett easily stepped in for the Bulldogs. He tossed five touchdowns on 10 of 12 completions. Even with that performance, Bennett strained his back late in the game, forcing Beck to take over. Beck threw 10 passes and only completed four. This caused questions to rise about the offensive ability for the Bulldogs come Saturday.

Nonetheless, Georgia has a special defense. So, expect the Bulldogs to dominate a shaky Gamecock offense even with minimum quarterback options.

The last time the Bulldogs lost at home was 2019–against the Gamecocks. South Carolina pulled off a miraculous win in double overtime, as the Bulldog’s kicker missed a potential game tying field goal in the second overtime. The Gamecocks hope to pull off some magic Saturday night.

The Gamecocks have a quarterback battle going on, as well. Graduate assistant Zed Noland started the first two games for the Gamecocks, but Luke Doty is coming back from an ankle injury and has the potential to start. Whoever starts for the Gamecocks will have their hands full against the Bulldogs defense.

Despite both the talented offenses, the Bulldogs are the all around better team, and if they contain the Gamecock running backs on the defensive end, Georgia should have no problem cruising to 3-0.

JT Daniels has decided to leave Georgia for West Virginia. The quarterback is now at …