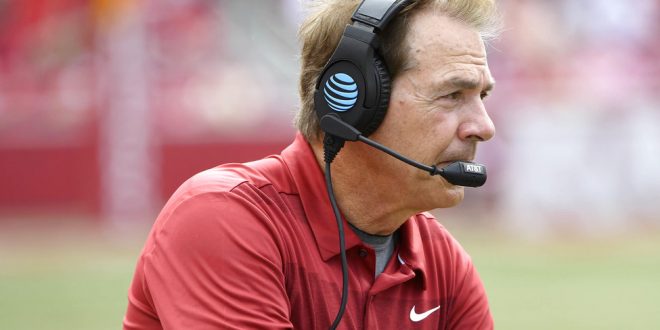 “There’s a lot of things that we need to do better, no doubt,” head coach Nick Saban said following No. 1 Alabama’s 31-29 road win over No. 11 Florida Saturday.

Credit Where Credit’s Due

He credited Florida’s offensive game plan, which produced over 250 rushing yards and turned the ball over only once.

“We had a difficult time stopping the run,” Saban said. “They took out of a lot of things that we wanted to do when they kept running the speed option.”

In the seven previous games since 2010 in which Alabama didn't crack 100 rushing yards, the Tide had never been outrushed by more than 84 yards, South Carolina's margin in that 2010 win.

“I thought their quarterback did a really good job of completing some passes when they needed to.”

After they built a commanding 18-point lead in the first quarter, the Crimson Tide watched their advantage diminish to five points entering the fourth quarter. Saban thought his team let off the gas pedal and he stressed the importance of maintaining the same intensity level from start to finish.

“When we got ahead 21-3, our players played absolutely great football and then we go three plays and out three times a row on offense,” he said. “Eventually, they score a touchdown, get the crowd back into the game, and then it was difficult after that.”

Saban did mention some positive takeaways after the win. He commended sophomore quarterback Bryce Young’s ability to adjust to Florida’s hostile atmosphere.

“I thought Bryce [Young] did a good job of managing the crowd noise. There were some times where it gave us issues, but it was really more of a snap-count issue more than it was his doing.”

Young threw three pass touchdowns in the first quarter before the Alabama offense stalled for the last three quarters.

Alabama leads Florida at the half, thanks to 3 TD passes by Bryce Young.

Despite Florida’s comeback, Saban praised Alabama’s resiliency down the stretch of the game on both sides of the football.

“Our players showed a lot of resiliency,” he said. “We made the plays that we had to make on offense to stay ahead in the game as well as take the air out of it at the end of the game.”

With under four minutes left in the game, the Crimson Tide denied Florida’s two-point conversion attempt, which effectively silenced the crowd and allowed Alabama’s offense to run out the clock.

Alabama will return to Tuscaloosa to face Southern Miss this Saturday before its SEC schedule resumes.

Hello, I am currently a junior at UF studying sports media journalism with a concentration in Political Science. I contribute web and radio content weekly for WRUF ESPN Gainesville. Be sure to check out some of my recent articles!
Previous Jaguars fall to 0-2 after Broncos loss
Next Week Two: Around the NFL

Ahead of the Gators matchup with the No. 1 ranked Georgia Bulldogs, Coach Dan Mullen …