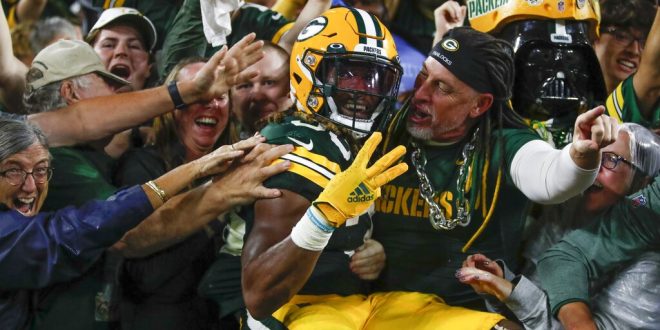 After a 38-3 thrashing by the New Orleans Saints, the Green Bay Packers bounced back in a statement win. Last night the Green Bay defeated the Detroit Lions 35-17 on Monday Night Football. Aaron Rodgers threw for 255 and 4 touchdowns in the victory and surpassed John Elway to crack the top-10 in passing yards all-time. He now sits behind Matt Ryan at 51,633 yards.

Jared Goff, on the other hand threw, for 246 for 2 TD and an interception in the loss for Detroit.

Aaron Jones made history last night as the Packers defeated the Lions. Jones became the first person to score four touchdowns on Monday Night Football since Marshall Faulk did in 2000. Faulk had three rushing touchdowns and a receiving touchdown against the Tampa Bay Buccaneers in a final score of 35 to 31.

Jones dedicated this game to his late father who passed away from COVID complications in April. The Packers running back lost his father’s ashes in which he carries around his neck on one of his TD runs but had a positive outlook on the situation. Aaron Jones said this post-game.

“If there was any place to lose it, that’s where my dad would have wanted me to lose it… I know he’s smiling.”

Somewhere above Alvin Jones Sr is looking down upon one of the best RB’s in the league with pride.

Rodgers also commented on the star back.

A tale of two halves killed Detroit’s chance of winning last night. On the first drive, the Lions were surgical capping a 75-yard first drive with a touchdown. Detroit even led 17-14 at the end of the first half.

.@Lions TE @TheeHOCK8 has produced at least 50 receiving yards and a TD in consecutive games for the first time in his career.

He joins TE David Hill (1981) as the only tight ends in franchise history to do so.#OnePride pic.twitter.com/gsWsONX596

The Packers would go on to score 21 unanswered to rout the Lions. While Detroit looked dominant in some parts of the game, they have failed to replicate it through four straight quarters this season. With losses against the 49ers and the Packers to start the season the Lions’ next game is a must-win.

Looking for their first win of the season, Detroit will take on the Baltimore Ravens next Sunday. The Ravens’ last matchup saw Lamar Jackson and Co. defeat the defending AFC champs the Kansas City Chiefs. On the other hand, Green Bay will play the 49ers on Sunday Night Football.

Ethan Sanabria is a second-year telecommunications student on the digital film and television production track at the University of Florida's College of Journalism and Communications. He has previously worked as a broadcaster for the Florida Flight basketball team and currently helps the production of WUFT news facebook lives. You can reach Ethan on any of his social media or at Ethansanabria@ufl.edu.
@ethansanabria
Previous Coach Dan Mullen Talks Alabama Game and Gator Nation
Next Former Gator Mark Kolozsvary Gets Called to the Big Leagues