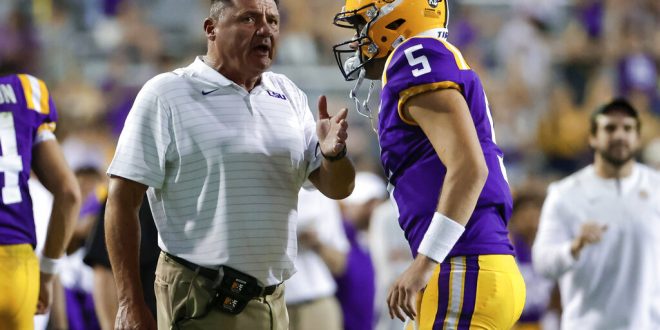 The LSU Tigers and Mississippi State Bulldogs both open SEC play this weekend with something to prove. In what may be a season-defining game for the two programs, the winner will likely prove that they can remain competitive in arguably college football’s most difficult conference.

Both teams head into this matchup possessing a 2-1 record.

LSU did not start its 2021 campaign on the right foot but has rebounded nicely in the following weeks since. After a disappointing Week 1 loss to UCLA that included Coach Ed Orgeron’s memorable run-in with a fan, the Tigers blew out lesser opponents in McNeese State and Central Michigan.

Even after two comfortable victories, Coach O was not fully pleased with his team just yet and expressed some concerns. Among his concerns include the team’s lack of a running game and poor offensive line play.

Meanwhile, Mississippi State is coming off a gut-wrenching loss to Memphis that was marred by controversy. On one of the most bizarre plays you’ll ever see, a Bulldogs punt that was seemingly called dead by an official never drew a whistle. This lead to the Memphis punt returner scooping the ball, to everyone’s surprise, and rushing down the field for a 94 yard touchdown return.

Ultimately, the controversial non-call would obstruct Mississippi State’s path to victory, as they fell to Memphis 31-29.

QB Play Will be Crucial

After winning the starting QB gig following an injury to Myles Brennan, sophomore Max Johnson has performed admirably for LSU. Johnson’s 11 passing touchdowns is second in the nation despite playing behind a lackluster offensive line. He may not play to the standards of former LSU Heisman-winner Joe Burrow, however, Johnson looks poised to lead this team during his tenure in Baton Rouge.

Mississippi State and its Mike Leach-inspired air raid offense is also led by a sophomore in Will Rogers. The gunslinger ranks 5th in the nation and leads the SEC in passing yards and has done a nice job guiding a Bulldog that very likely could have been undefeated heading into this weekend.

When asked about Rogers, Coach Orgeron had high praise for him.

Which Team Will Prevail?

Both offenses are slated to put points on the board in what could very well end up being a shootout. This contest will decisively come down to which team’s defense can come up with more key plays in key moments. This should be a fun one in Starkville.