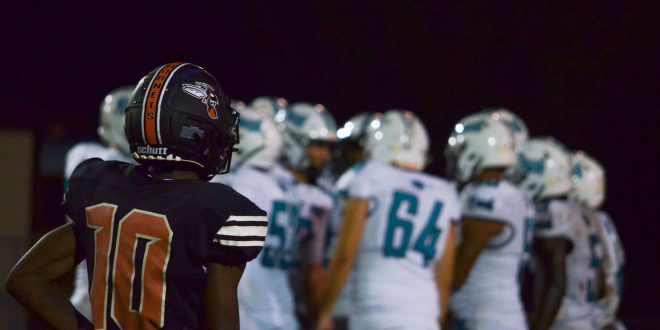 The Hawthorne Hornets defeated the West Port Wolf Pack Friday night to the tune of 52-20.

Coming Into the Game

West Port came into this game 0-4, being outscored by a whopping total of 95-12. Hawthorne, on the other hand, came into this one 3-0, outscoring their oppositions 86-14.

Statistically, the writing was on the wall for Hawthorne to pick up the win in front of their home crowd, even with themselves being 1A and West Porting being 8A.

And, well, that is exactly what went on to happen.

This matchup spelled trouble for the Wolf Pack quickly. While both teams came out with initial energy through the roof, Hawthorne’s dominant first 12 minutes quickly dispelled any energy not coming from their side of the field.

On the game’s first snap, Junior QB Tyler Jefferson found Senior WR Chris Jonas who would go on to take it 75 yards to the hole. Seventeen seconds in, Hawthorne led by 6.

By the 9:12 mark, Tyler Jefferson threw for his second touchdown of the night which aided the following two-point conversion in a 14-0 lead for the Hornets.

Nearing the halfway mark of the first, a forced fumble and recovery in the end zone became Hawthorne’s third score. After the second failed two-point conversion of the night, the Hornets led 20-0.

With 2:58 left, Hawthorne found the pylon for what would be the final time in the first, resulting in the final score after 1: 26-0.

The Hornets momentum carried right over into the second, to say the least.

On the first play of the quarter, an A’ramion Armitage rushing TD via handoff from Senior QB Chaz’ Mackey put West Port down 32; the missed PAT that followed left it at that.

With 10:39 remaining in the half, the Wolf Pack finally got themselves on the board. A key stop and strong possession later, with 6:53 left, West Port scored for the second time. At this point, they had 12 points unanswered and found themselves down just 20. All things considered, this seemed like a manageable position to be in.

However, little did they know that this would end up being their last moment of hope.

Three unanswered touchdowns in the final 6 minutes of the half, including a pair of rushing touchdowns by Tyler Jefferson, paved the path for a prodigious halftime score of 52-12.

Time and pace-wise, the second half of this game was the antithesis of the first.

The first 24 minutes of this game went on for nearly two hours, loaded with touchdowns galore. The final 24 was over in significantly less than half of that time.

A singular West Port drive took up the entirety of the third quarter.

That drive, ending at the 10:16 mark of the fourth, did end up in a West Port touchdown and two-point conversion. At this point, what ended up as the final score was up on the board: 52-20.

With four forced turnovers on the night, the Hawthorne defense continued to perform well. Even with the three in this game, the Hornets have allowed just four offensive touchdowns all season.

However, Hawthorne Hornets Defensive Coordinator Dustin Adkins is not yet satisfied and was not exactly thrilled with his group’s outing versus West Port.

Adkins spoke on his group after the win:

On the offensive side of the ball, Hawthorne QB Tyler Jefferson impressed yet again. After winning The Gainesville Sun’s “Freak of the Week” award for Sept. 17, which comes via a poll that highlights top performers from high school football teams in the Gainesville area, he proved to be deserving. His combination of size and speed, as well as solid arm talent, gives him a versatility that wreaks havoc for opposing defenses.

West Port will travel to play Lake Brantley (3-1) next week, still looking for their first win of the season.

Hawthorne is the only undefeated team left in the Gainesville area and will travel to Live Oak to play Suwannee. Suwannee was supposed to be their week-three matchup; however, after being canceled due to undisclosed covid reasoning, the game was moved to week 5 for the Hornets.

Dustin Adkins on the upcoming matchup with Suwannee:

You can expect a good one next week for last year’s state runner-ups, as Suwannee is clearly not being taken lightly by them.

Zackary is a Journalism major at the University of Florida with a focus in sports. He has years of experience providing sports-related online content for various news outlets, as well as experience running multiple social media accounts with high followings. Zackary's planned graduation is May 2024. Please feel free to contact via email at zackweiss48@icloud.com. Links to Zackary's personal social media accounts are directly below.
@zackaryweisss
Previous Santa Fe Falls To A Well-Rounded Gainesville Squad
Next Pat Dooley’s Grades: Vols vs Florida