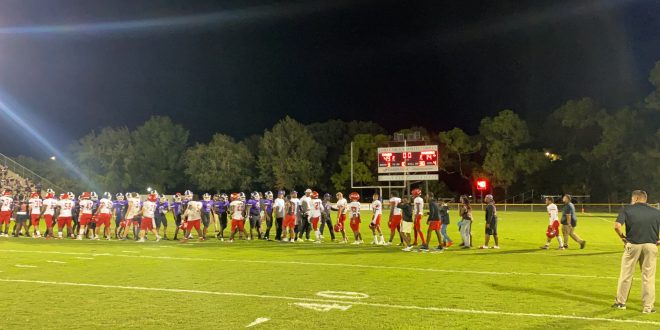 The very first day of cool weather in Gainesville brought out all the football fans for the Gainesville-Santa Fe showdown. The opening drive resulted in a three-and-out for the Raiders, followed by a punt that left Gainesville with a short field to work with. The Hurricanes were able to capitalize with a 10-yard touchdown run by John Cooper.

Gainesville was able to force a turnover on the following possession once again, putting themselves in prime position. It was now Mario Mitchell’s turn to score for the Hurricanes pushing the score to 14-0 not even halfway through the first. The Raiders answered by putting together a strong drive and pushing into enemy territory but, then turned the ball over on downs on a short yard stop by the Canes. This led to a dart by Gainesville’s Shooby Coleman to Khamari Frazier to stretch the lead 21-0 to end the first.

A turning point occurred after a nice Cane’s drive came to an end after the Raider’s defense was able to force a punt. During the punt a roughing the kicker was assessed, allowing for Gainesville’s drive to stay alive. The next play resulted in another John Cooper rushing touchdown extending the lead to 28-0.

The Raiders answered in a strong way on the following drive with an outstanding diving catch by Devan Mitchum. The catch put them in field position for Keyon Carter to bully his way into the endzone to put the Raiders on the board with 6:20 left in the second quarter. Additionally, the Raiders followed up by a perfectly executed onside kick by Zach Williams to regain possession. Momentum was beginning to change once again.

After forcing Santa Fe to punt after an onside recovery they were held at their own 6. John Cooper was able to add to his massive night by breaking free for a 94-yard touchdown run. The combination of Cooper’s first-half performance and touchdown scamper had the whole Gainesville crowd ecstatic. After another touchdown reception by Brent King, Gainesville was able to enter the half with a 42-7 lead.

First play of the drive for the Hurricanes. Massive 94 yard touchdown run by John Cooper. 35-7 Hurricanes 4:16 left in the second. pic.twitter.com/E9L1AGSuex

Quiet Second Half by Both Teams

With the running clock in the second half, it was hard to get anything going for either team. Santa Fe’s quarterback, Blake McCormick, was able to punch it in from the 1-yard line with five minutes left in the third to make it 14-42. Gainesville concluded the scoring for the night with a touchdown reception with five minutes left in the game. The final score was 49-14 leaning towards the Gainesville Hurricanes.

The Santa Fe Raiders defensive coordinator (interim head coach for the night), Coach Wood, reflected after the loss, “Our guys never quit, they played through it, I’m proud of them for that.” Coach Wood also stated he felt he did not feel the intensity level was where it needs to be all four quarters.

Santa Fe will have another shot of getting on the right track next Friday at P.K. Younge.

A third-year journalism student with a focus in sports and media.
@kylecurtisss
Previous Gator Volleyball Fails to Beat Mississippi State 54 times in a Row
Next Hawthorne Rolls Through West Port, Improves to 4-0