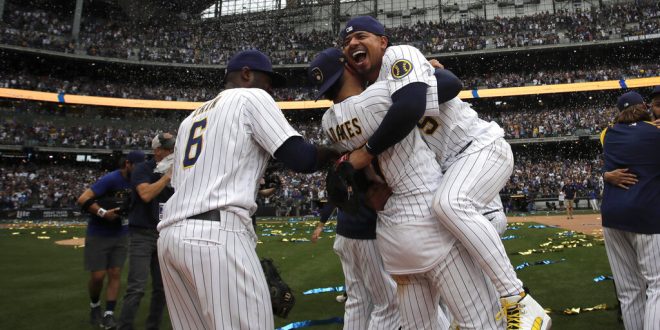 With an 8-4 win over the New York Mets on Sunday, the Milwaukee Brewers are the National League Central champions.

After clinching a spot in the playoffs on Sept. 18, the Brewers secured the division in front of a sold-out crowd at American Family Field.

The Brewers have held first place in the division since June 23 and finally secured the crown on Sunday.

The 2021 title is the Brewers’ second in the last four years and their third since joining the NL Central in 1998.

Milwaukee Brewers manager Craig Counsell said the fans were a key part of the division victory.

The Brewers’ 94-62 record comes behind the offensive leadership of Avisail Garcia and the pitching prowess of Corbin Burnes.

Burnes has taken a step forward this season earning himself an 11-4 record. He has a 2.29 ERA and 230 strikeouts on the season.

Burnes said the team hopes this is just the beginning of their success.

The Brewers have the third-best record in the National League and are eight games back of the league-leading San Francisco Giants.

Milwaukee will finish the season on a six-game road trip.

The Brewers will stop in red-hot St. Louis to take on the Cardinals in a three-game series before heading to Los Angeles to close out the regular season against the Dodgers.

Chris Will is a second-year journalism student with a focus in sports and media. Originally from the Fort Lauderdale area, Will is now the beat reporter for Florida Gymnastics and covers all things sports in Gainesville.
@_Chris_Will_
Previous Eagles and Cowboys Renew Rivalry
Next Gators AD Stricklin reacts to Newbauer allegations in Published Story